I’m a big fan of Chorizo! In fact I went through a phase a few months ago where I was eating it at least several times a week. 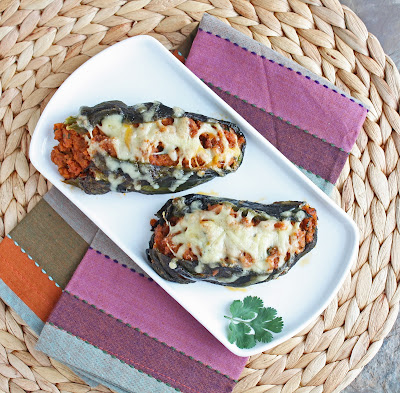 Some of my favorite recipes are the Chorizo & Manchego Stuffed Mushrooms, the Spinach, Goat Cheese & Chorizo Omelette, and the Caramelized Brussels Sprouts w/ Chorizo.  They are all delicious, and low carb, so I can enjoy them whenever the mood strikes.  But there is one recipe that I really miss since starting low carb, and that is the Cheesy Chorizo Enchilada Pie.  Something about all of the flavors and textures together is just magical!
But obviously on low carb the beans and corn tortilla’s are out (she types sadly).  Well I’ve been craving it for a couple of weeks and was starting to get desperate for an alternative.  It had to be cheesy, and chorizo-ey but I also needed it to be hearty and comforting like the carb-laden original, or I knew it would be a lame substitute.  Using the poblanos as a “package” was an easy choice – I’d done it before with great success in the Roasted Poblanos stuffed with Pulled Pork Chili Verde.  The filling was the challenge – what to add to cut the cheese and chorizo?  I ended up using a mix of cauliflower, coconut flour and egg that I seasoned with cumin and some other spices.  I’m happy to say that it came out great! 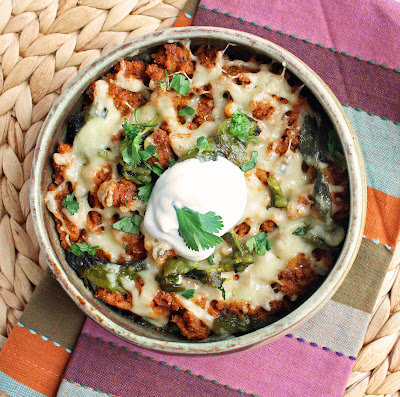 The cauli mix added a starchy component almost like refried beans mixed into it and a slight sweetness that mimics the corn tortilla flavor.  It’s almost as if you took a piece of the enchilada pie and put it in a food processor and stuffed these peppers with it.  Totally awesome!  Of course I added more cheese on top.  What’s great is that you don’t have to bother with stuffing the peppers if you want to skip that step.  I also sliced up the last couple into strips, spread them out in an ovenproof bowl, covered with the chorizo mixture and extra cheese and baked it in the oven. 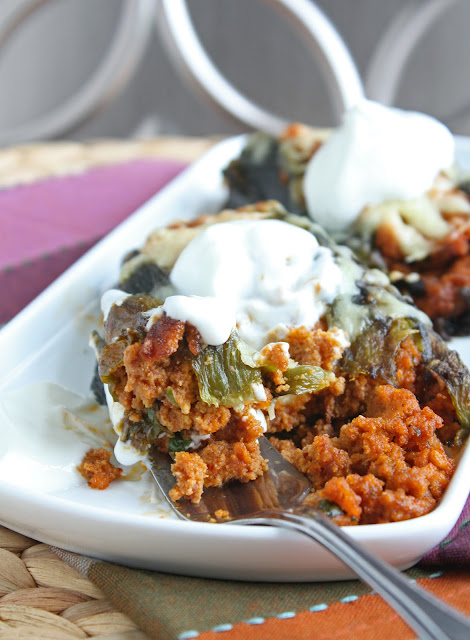 Just as tasty and not quite as much work as stuffing the peppers.  Great for an easy family meal.  It can be assembled the day before and reheated as well which is nice for during the week.  No matter when and how you eat this it’s going to taste great!  It’s definitely spicy between the chorizo and the poblanos but it’s not ridiculously hot in my opinion.  You can cool it down with some sour cream or greek yogurt, salsa, and/or guacamole or slices of avocado if you have it. 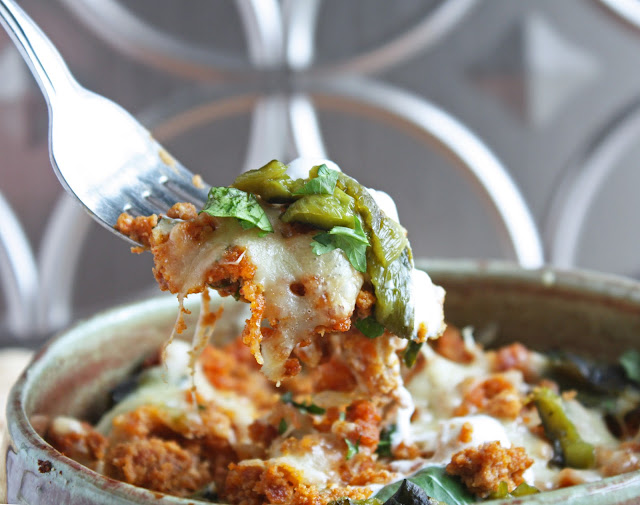 Nutrition info does not include garnish

These are hearty and satisfying and totally eradicated my craving.  It’s the ultimate spicy comfort food – I can’t wait to eat the leftovers for dinner after I finish this post!  :)  As a side note, these are VERY filling, so unless you have a large appetite you’ll probably feel full after just one.