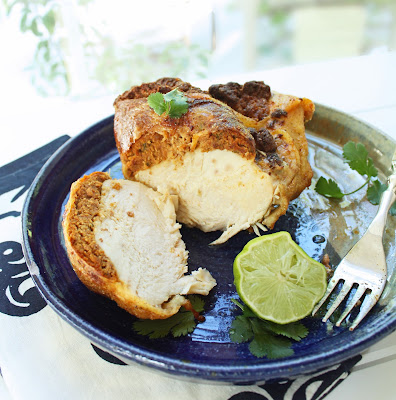 Last week I posted a recipe for chorizo stuffed roasted poblano peppers which came out delicious, if I do say so! When I was tasting the chorizo mixture, I couldn’t help but think that it would be excellent stuffed into a chicken. I obsessed about it as I often will until I just had to try it. 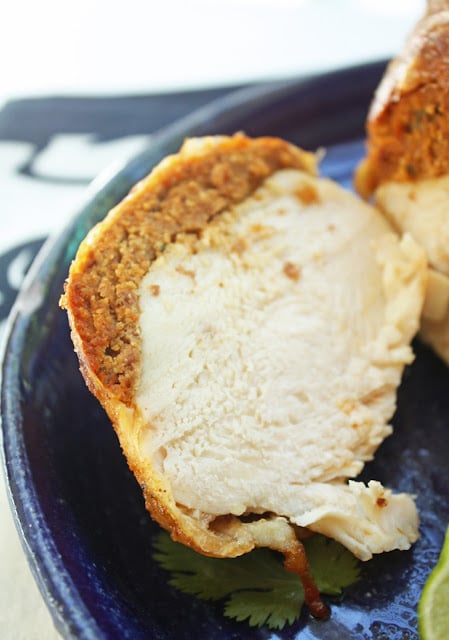 I had frozen the leftover stuffing which is made with chorizo, cheese, pureed cauliflower, coconut flour, and a few other odds and ends. I thawed it out so I could use it as chicken stuffing but then at the last minute, rather than using an entire bird, I decided to stuff it under the skin of a couple of bone-in chicken breasts. 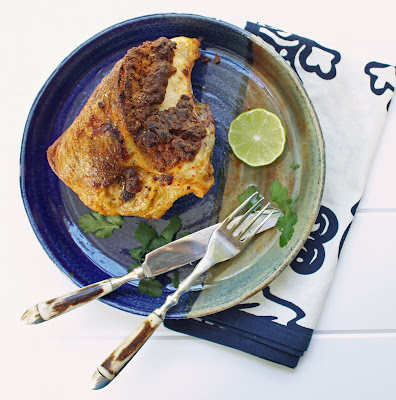 It’s been a long time since I cooked a chicken breast on the bone and with the skin still on. Years ago I started using the boneless breasts and never looked back. But wow, I forgot how juicy and flavorful a chicken breast cooked (correctly) on the bone is! It was awesome! Of course the spicy, rich stuffing probably didn’t hurt!

Either way, we really enjoyed these and I’ll be making them again for sure!

If you are cooking for just a few, freeze the unused portion of stuffing, but be sure you set it aside before you handle the chicken to avoid cross contamination.

I didn’t have any but you could also serve with sour cream and salsa – and even corn tortillas if you aren’t doing low carb. So good! Hope you like them!

As a side point, I was only able to eat half of one because they are super filling. Matt ate an entire one but he was pretty full afterward. You could also stuff an entire chicken with the stuffing and just serve it as a dressing on the side. Whatever works for you.

Next time I’m going to make a double batch of the stuffing so I’ll have it on hand whether I’m in the mood for the stuffed poblanos or the stuffed chicken – or anything else I can think of to stuff with this – maybe inside the bacon-wrapped jalapenos next time… or a hollowed out zucchini… or zucchini blossoms… baked stuffed shrimp….whole squid! The sky’s the limit!

What would you do with it? I’d love to hear your ideas because no matter what you put this stuff into, it’s going to taste great! Cross my heart!