The first time I ever ate swordfish and liked it was when I was 17 and working at a restaurant in CT as a prep cook.  I was skeptical at first when the head chef and his cronies offered me some.  They were notorious practical jokers and just the day before had given me a tablespoon of what they told me was mint sauce and turned out to be pure wasabi – which I found out the hard way.

I thought I was dying and they thought it was the funniest thing they’d ever seen.

It was only my first week on the job.

I retaliated during dinner service that night by tossing an ice cube into the fryolater when their backs were turned, which resulted in a lot of jumping and squealing on their part – much to MY amusement.  Don’t try that at home kids – it’s dangerous and stupid.

Those big jerks deserved it though and it was a no holds barred, survival of the fittest type of scenario.  Growing up with three brothers, I knew how to hold my own and give as good as I got – and after that night I was officially “one of the guys.”

Even so, when I was offered a glistening chunk of swordfish with pesto mayonnaise on it during our lunch break the next day, I was understandably leery.  What kind of horrible retribution did they have planned for me this time?  After some sniffing and squinting though, my natural foodie curiosity took over and I couldn’t resist trying it.

That was one of the most delicious bites I ever took at the restaurant – which is saying something because I ate some amazing food during the 2 years that I worked there.

Man I loved that job – I never worked or laughed so hard as in that kitchen, and I learned a LOT about food and cooking that has stayed with me to this day.

Anyway, I’ve made versions of that dish many times over the years, but as I got older and swordfish became taboo because of the high mercury content I stopped buying it and making it.

Recently Hungry Jr. has expressed interest in trying more seafood, so I’ve been introducing him to some of my favorites.  He’s been wanting to try Mako shark but we’ve been having a hard time finding it – so I bought some swordfish which is pretty close in texture. 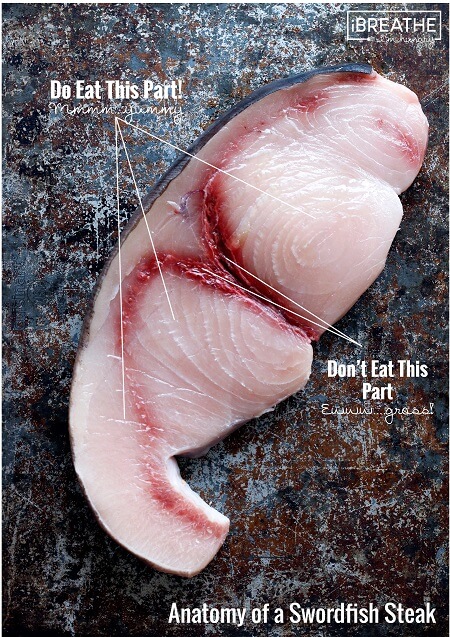 As a side point, when buying swordfish, look for one without the dark bloodline if you can – If you can’t find one and they all look like the one above, then simply trim around it before cutting into chunks for skewers, or if you’re eating it as steaks, just cut the bloodline out after cooking.

You don’t want to eat that part – it has an unpleasant strong flavor.

It’s been a couple of years since I’ve eaten swordfish and WOW I forgot how much I loved it!  Tender but meaty with a succulent, fatty quality to the meat that is just fantastic!

Mercury – Shmercury!  I’m putting swordfish back on the menu at least one or two more times this Summer – it’s just too good NOT to eat, and indulging every once in awhile won’t kill you any faster than a tuna fish sandwich.

This pesto mayonnaise (which is literally pesto + mayonnaise = your new best friend) will change your life, and complements a piece of swordfish like nothing else I’ve ever tasted. 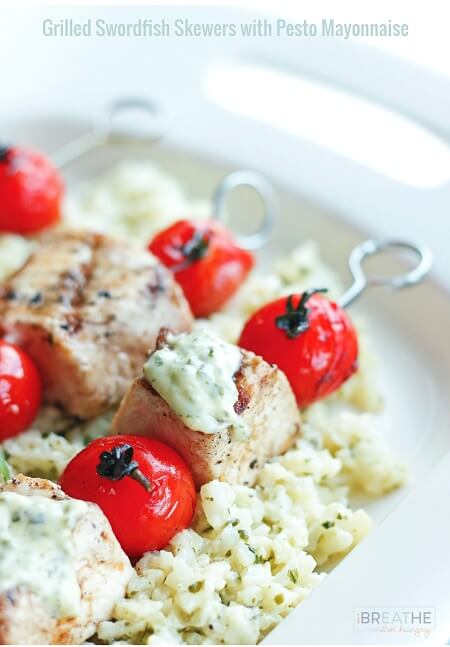 If you’re not a swordfish fan, this would also be fantastic on shrimp, chicken, salmon, or any other firm-fleshed fish.

You guys know I love easy – and it seriously does NOT get any easier than throwing some skewers on the grill, stirring together this pesto mayo and slathering it on with wild and reckless abandon. 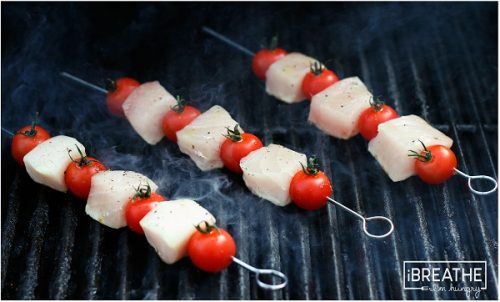 Actually it does get easier – skip the skewers and just throw some swordfish steaks on the grill instead if you really want to get straight to the eating part.  Just be sure to season them with salt and pepper and brush them with a little oil so they don’t stick.

These easy skewers are great with a simple salad, but we had them with the Low Carb Cauliflower Risotto with Pesto Cream Sauce I posted earlier this week and it was totally sublime.

I highly recommend this pairing – totally easy to make, but tastes incredible and is pretty enough for company. 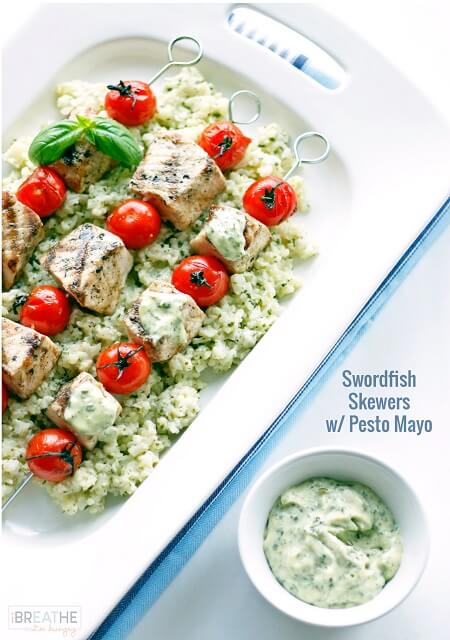 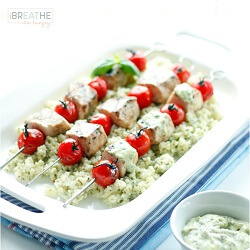 It doesn’t get much easier than these grilled swordfish skewers with pesto mayonnaise! Perfectly low carb and paleo friendly, you can sub in chicken, shrimp, or any other firm fish if you prefer!

New to the low carb lifestyle and need some help? Try my FREE 3 day keto kickstart menu plan to get into ketosis fast! Then follow it up with any of my 12 free weekly menu plans – complete with shopping and prep lists!

To get more great recipes for Summer or anytime, download my super bundle of FIVE e-books for just $19.99! 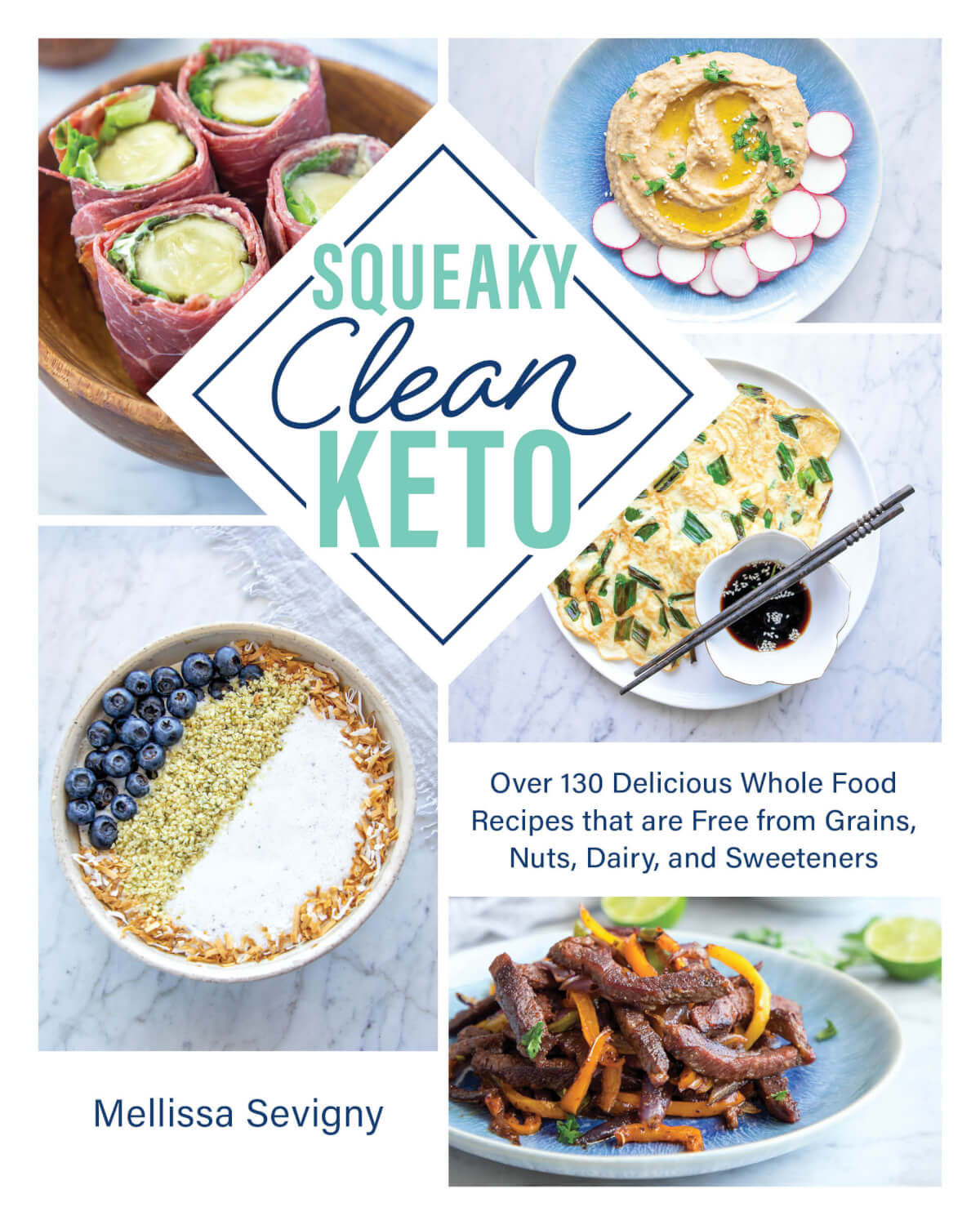