We all have our favorite Summer traditions, and having spent most of my life in New England for me Summer means LOBSTER.

Almost every year Mr. Hungry and I would vacation in Maine, Cape Cod, or even Rhode Island – and at least one lobster dinner was obligatory, more if the mood struck. 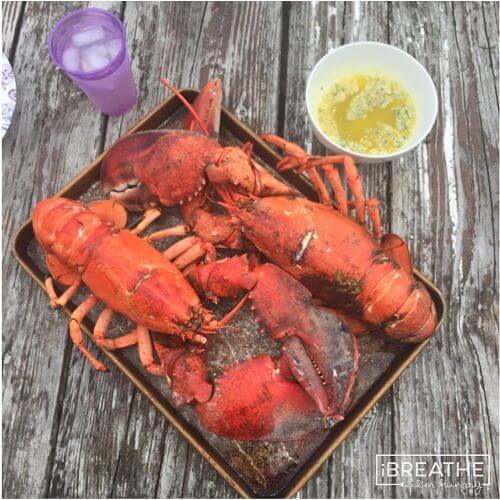 Having lived in South Carolina for the last five years, it was almost impossible to get a decent Maine lobster – and the pathetic, half dead specimens you could find were usually WAY overpriced!

Now that we’re living in New England again, lobster is back on the menu this Summer and I plan to enjoy it as much as possible!

With that in mind, when lobsters went on sale for $6.99 a couple of weeks ago I knew I was getting some. We had plans to have some people over that weekend already, and at the last minute I decided that a few lobsters wouldn’t hurt as an appetizer.

With friends set to arrive in less than an hour, I called the store to order my lobsters (steamed so I could pick them up ready to serve.) I was told that all they had left was 3-4 pounders, but that she’d give them to me at the $6.99 price.  I ordered several of them and she told me it would be about 15 minutes.  I rushed over to pick them up…

and that’s when the wheels fell off…

When I got to the counter after killing a few minutes in the store to give them time to complete my order, this nice elderly gentlemen named Joe told me they don’t start them until you arrive in case you don’t show up. (This would have been helpful to know on the phone.)

I asked him how long it would take to have them steamed and he said 10 minutes EACH because it’s an older store and their steamer is small and ancient. I didn’t have that kind of time so I asked him to just bag me up 3 of them live and I’d cook them at home. 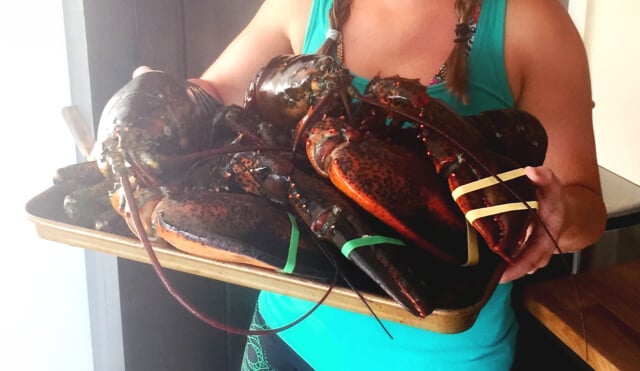 Apparently it was Joe’s first weekend in the fish market – he usually worked deli and it showed.  He must have been pushing 70 and wasn’t a big guy, so the lobster tank was almost taller than he was. Watching him try to wrestle these things out of the tank was painful and terrifying.

He got the first one out (finally) and when he put it onto the scale it was almost five pounds. I didn’t have the heart (or the time) to have him throw it back in and find me a smaller one so I just said, “It’s fine I’ll take it. Can I get two more – a little smaller this time?”

He sighs and nods, resolutely turning back towards the tank, and since I can’t stand to watch I run down to produce and grab some limes for the margaritas I was now sorely in need of.

I come back about five minutes later and he’s only just got the second one on the scale – another one just under five pounds. Our eyes meet and I just nod. His relief is palpable and we’ve got an audience now because the deli counter is right next to seafood and everyone waiting there has started to take notice.

Two nice older ladies were waiting for their turn and watching me with wide eyes – I smiled and shrugged. One of them said, “I hope you have a BIG pot!”  I laughed and told her I was going to throw them on the grill and hope for the best.

The other lady said, “What if they jump off and get away?”  I assured her I would humanely kill them first, but she didn’t look convinced.

By now, poor Joe is going in for his third round and it was getting ugly. These lobsters were LIVELY and he was still trying to wrangle my last one out of the tank with the forky rakey thing.

After what felt like hours he finally grabs it by the tail and turns around holding it up triumphantly with his glasses askew and the bill of his baseball cap dripping with salt water.

I swear I thought the ten or so people standing around were going to break into applause.

Meanwhile I’ve still got to get these beasts home and cooked, and my company was due to arrive any minute so I just wanted to get out of there.

Joe heaves the lobster onto the scale and it was over 6 pounds! I just said “I’ll take it, I’ll take it” and the two older ladies shook their heads looking worried.

They weren’t the only ones.

The story doesn’t end there my friends – poor Joe was still trying to secure them so I could get them home. He put them into the seafood bags and tried to roll them and staple them down but the lobsters were really fighting now and the staples were shooting off like “Pew! Pew! Pew-Pew-Pew!!!” while a giant banded claw kept punching out of the top of the bag!

I wasn’t sure how I was going to get them home but by then I didn’t even care anymore.

I JUST NEEDED TO GO.

Finally I told him to double bag them and staple the heck out of them and he handed over the writhing bundles.

I could go on and on about the hilarity that ensued while I hurled them onto the conveyer to horrified stares from the customers, and the gangly teenage cashier who looked absolutely terrified as they sped towards him on the conveyor belt, raining staples in every direction.

Or about how I sped home, looking over my shoulder in hopes that they wouldn’t escape their flimsy plastic restraints and start heading for the front seat.

I did FINALLY make it home alive, and managed to dispatch them quickly and get them on the grill to oohs and ahhs.  Then I made myself a much needed Margarita.  Yummy. 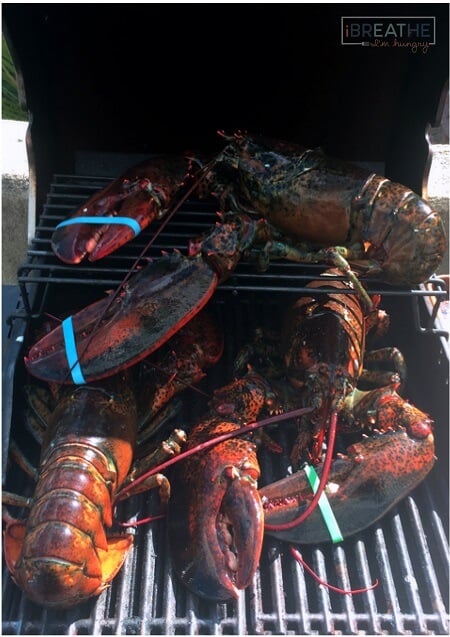 Once they were cooked it took three of us, more margaritas, and a huge hammer from Mr. Hungry’s tool box to break them apart on the picnic table down by the lake. After one ill-fated strike on an especially thick claw I was showered in lobster gunk literally from my head to my toes.

It was a small price to pay for some of the most tender and delicious lobster I’ve ever tasted though.

In the end, we had a fantastic time. In my experience, the best way to eat lobster is surrounded by friends, with lots of laughing and a drink or two. That day was no exception (in spite of the downpour) and will be one for the books!

In spite of our best efforts, there was SO MUCH lobster that we just couldn’t eat it all – leaving plenty for me to make this fantastic chowder.

As you may remember from recent posts, I have been dairy free for awhile to see if it helps my allergies (it is by the way but that’s a story for another day.) Since I get requests for dairy free keto recipes all the time, I figured I’d make this chowder dairy free as well – though you could easily substitute heavy whipping cream and water for the almond milk and it would probably taste even better. 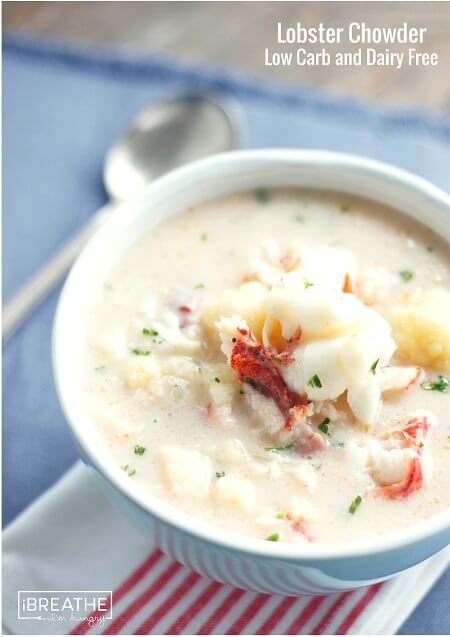 I had to play around with the flavors a bit to get it right because of the no dairy thing, so I recommend making it without any substitutions if you can.

The vanilla almond milk, apple cider vinegar, and cointreau might sound a little crazy, but I promise you that together with the other ingredients it makes an unctuous, mouthwatering broth that perfectly complements the lobster and slightly sweet cauliflower. 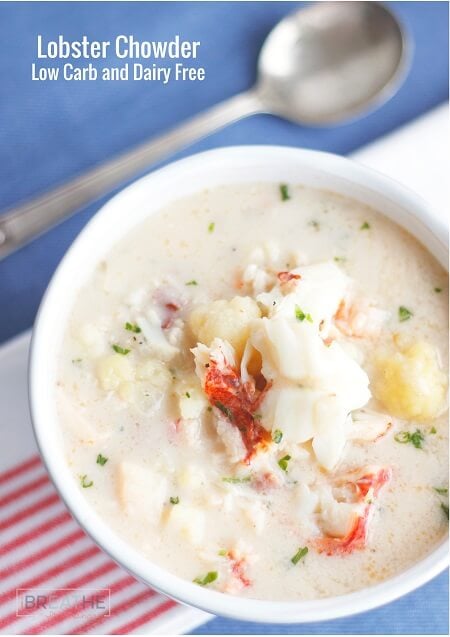 It’s one of the best low carb soups I’ve ever made.

If, like me, you rarely if ever have leftover lobster hanging around, you can either get them steamed by your local grocery (just don’t do it when you’re pressed for time) or buy the good quality frozen canned lobster meat to make it even easier.

If you do that, you can get some lobster shells from the seafood department dirt cheap to make your quick stock with. 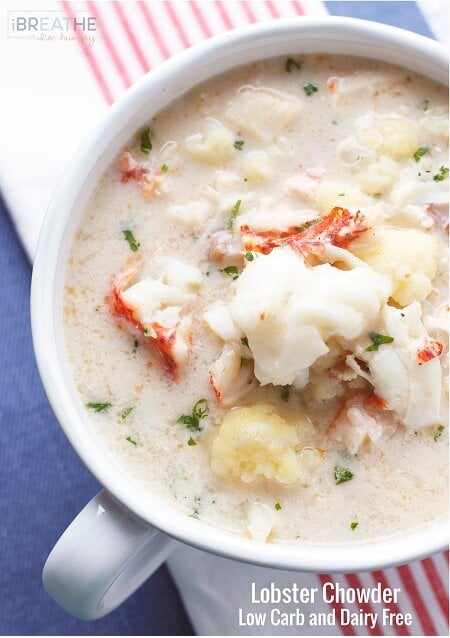 Shrimp will work in lieu of the lobster if it’s not available or budget-friendly in your area. Just be sure to use good-sized ones and save the shells to make your stock.

I used butter in my version because it doesn’t aggravate my dairy issues, but if your dairy problem is with the casein in dairy, rather than the lactose, then you can substitute coconut oil or another fat.  You may need to adjust the salt accordingly at the end to make up for the slight difference in flavor. 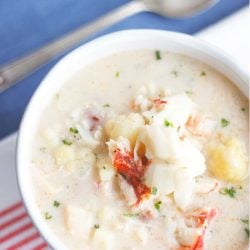 This fantastic lobster chowder can also be made with shrimp, and is low carb, gluten free, AND dairy free!

To make the lobster broth:

To make the chowder:

So I just got my grocery store flyers in the mail and guess what? Lobsters are on sale for $6.99 again! I’ll be heading to the store tomorrow to get some more.

Hopefully Joe has gotten the hang of it by now, but if not at least we’ll be entertained – and this time I’ll make sure I leave extra time (and bring an extra stapler) just in case….

Can’t get enough low carb recipes?  Download my super bundle and get all FIVE of my e-books (over 150 fantastic low carb and gluten free recipes) for just $19.99!