So I have to give Mr. Hungry mad props for this idea. I was brainstorming meatball ideas for my list a few weeks ago and asked him to throw a few out there – this was one of his contributions, and it was a really good one. How it would be executed was going to be my problem – and I think I worked it out pretty well! 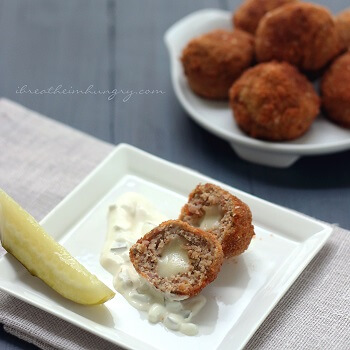 Classic Chicken Cordon Bleu is a French preparation that is typically made from a chicken breast that is stuffed with swiss cheese and ham, then breaded and fried to crispy perfection. It’s then sometimes (but not always) served with a creamy white wine sauce.

For this recipe I decided to add the chopped ham to the meatball mix (for which I used ground turkey because it was on sale), and then stuff the center with a chunk of Swiss cheese. I breaded it with seasoned coconut flour and fried them so they would have that classic crispy exterior.

Personally, I think these meatballs are even better than the classic recipe using chicken breast – but I love meatballs so you can take that with a grain of salt.

I was feeling pretty good about this recipe – I had tasted the first test meatball and thought it was a definite winner. I was frying up the rest of them and Mr. Hungry came in from working outside so I had him try one. “One of your best meatballs yet!” was his muffled response as he went back out to the shed to resume whatever important “man stuff” he does out there.

Confident in my meatball making prowess, I continued with the rest of the batch. 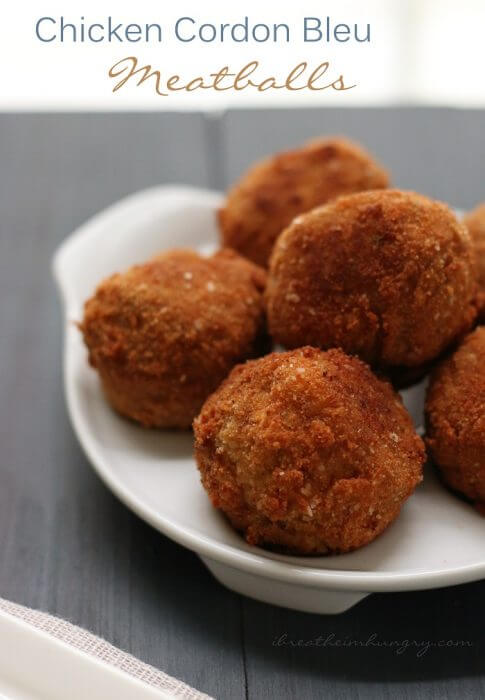 Not even a minute later, Hungry Jr. wanders in from the living room and this happened:

“Something stinks in here!”

“Awesome. Why don’t you go outside and play?

“No way. *sniff, sniff* It smells like when Grandpa was in the hospital in here.”

“Wow, thanks for that resounding endorsement!”

“No thanks, I don’t like that gross cheese in the middle that tastes like feet. I’m going to go outside with Dad now.” 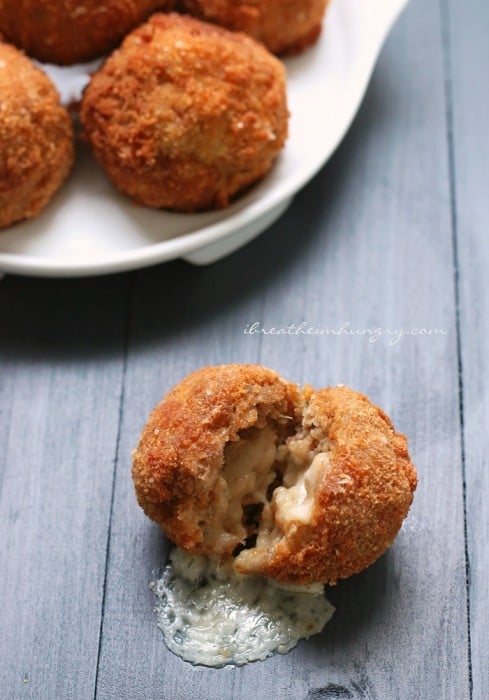 Nothing like trying to get a recipe past your kid to bring you back down to earth! To be fair, I hated swiss cheese as a kid too. If you or someone in your family isn’t a fan, you can always substitute something less offensive like cheddar or Monterrey Jack instead!

In all honesty, these meatballs don’t really need a sauce – they are super tasty on their own, especially when hot and the cheese is all oozy. I did throw together a quick and easy cold sauce though, because I like the contrast in temperature sometimes. Since there was ham and cheese in the meatball, I added a little Dijon mustard and chopped dill pickle to the sauce because it seemed like an obvious pairing. 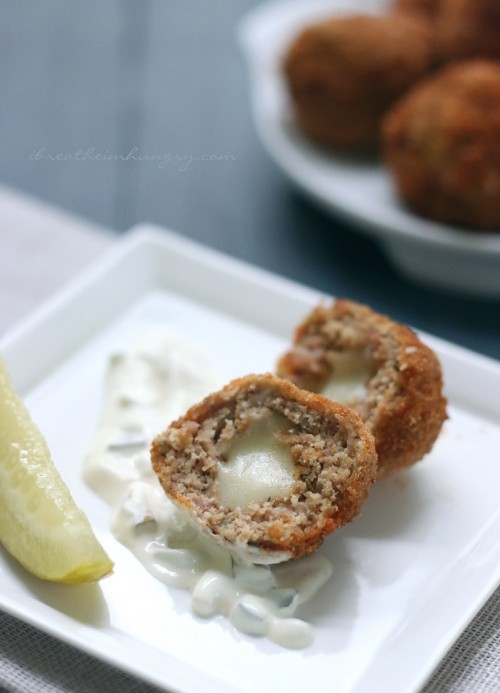 The meatballs and sauce were delicious together – and I especially liked eating them cold the next day! These meatballs make an awesome low carb lunch option for when you’re at work or on the go – they are easy to eat with your hands and don’t need to be reheated to taste amazing!

Despite Hungry Jr.’s less than enthusiastic response, I promise that these are fantastic and I’m pretty confident that YOU at least, will love them!

A low carb and gluten free meatball recipe based on the classic French Chicken Cordon Bleu. Stuffed with Swiss cheese and fried to crispy, golden perfection!

To make the sauce: