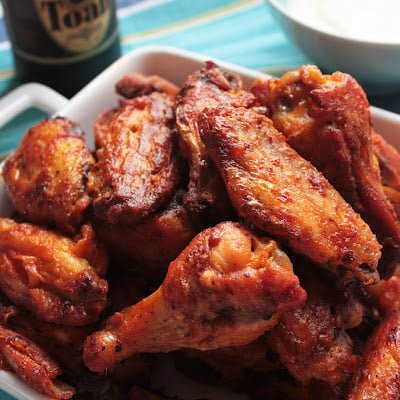 Welcome to day six in my week of low carb posts! Today also marks my 6 month blogoversary! Yay! Like many bloggers, when I started this blog I had no idea what I was doing (I still don’t!). I just knew that I loved cooking, and taking pictures of food – so I thought why not write about it as well? And yet I never planned for this blog to be primarily about food – I intended to write about gardening, DIY stuff, photography, in addition to some cooking. Within a couple of weeks though it rapidly turned to a food centered blog. Really not surprising I guess, since cooking and feeding people is my favorite thing to do.
When I started I only had one or two readers (thanks Leigh & Elayne!) and I never dreamed I’d get to a point of thousands of hits per day! I thought 5,000 a month was a pretty good goal at the time! In the beginning I didn’t want to tell anybody I knew about it because I was so self conscious – and frankly didn’t know if I’d stick with it or if it would be successful. I didn’t even tell my husband for the first week or so! It’s strange that it feels more comfortable having total strangers read your blog then your own friends and family! And so here I am…a food blogger! I still have a lot to learn and I’m excited about what the next six months will bring! Definitely some great giveaways – something I haven’t tried yet and I’m super excited about so stay tuned! Before I get to the food…omg are you yawning??? How rude! :)  Scroll down to get to the recipe if you’re bored already!!
If you bear with me for a bit longer, I just want to take a minute to give a shout out to some of my favorite blogs and bloggers that have inspired me and helped me get to this point – an idea I got from Sonia over at The Healthy Foodie.   The first blog I ever followed, Sonia takes some of the most beautiful food pictures I’ve seen! Her recipes and photos make you WANT to eat healthier–and she’s never preachy about it! She’s dedicated and hardworking and rarely takes a day off from the blog (I don’t know how she does it!) – in which she posts amazing recipes and writes honestly and candidly about her own life and struggles, so that even though we’ve never met I feel like I know her just from reading her blog. If you aren’t already following her, head over there STAT – it’s worth checking her out for the drool inducing photos alone! I tried pasting photos into this post but it kept locking me up so I had to delete them – guess you’ll have to visit their blogs to see more! :)
Next is Jenn over at Peas & Crayons. She is super cute and always sweet – not to mention funny and talented! Her blog is loaded with great recipes and photos as well as DIY projects and other fun stuff. She helped me get inspired to reorganize my kitchen and put my long abandoned scrapbooking stickers to good use labeling all my cute new jars! I always look forward to seeing what she is up to next!
Now if you like to laugh out loud and snort coffee all over your keyboard (and who doesn’t) head over to Kim Bee’s Cravings of a Lunatic. Totally unpretentious and always hilarious, Kim seems like the kind of person whose kitchen you want to hang out in with a cup of coffee or a glass of wine – you just know there will be a lot of laughing and some really great food! And her signature signoff of “Toodles & Smoochies” never fails to make me smile.
Finally, a blog that most of you probably know about already – Helene DuJardin’s Tartelette. I’m pretty sure Helene doesn’t know that I exist but I have stalked followed her blog since early on because she is the blogger I want to be when I grow up! Her book Plate to Pixel has done more for my food photography than any other resource I’ve found (and I still have a lot to learn!). If you are a blogger who wants to take better pictures, get her book and read it cover to cover! It costs less than 20 bucks and is the best thing you can do for your blog photography. Period. 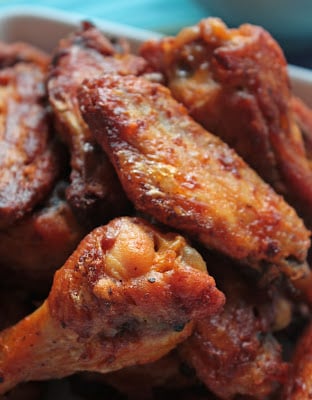 Speaking of photography, if you want to grow your food blog fast, there is no better way out there right now than getting your photos accepted by Foodgawker and/or Tastespotting. If you have tried and been rejected, don’t give up! And don’t be bitter – get better! Nobody wants to hear you whine (on your blog, twitter, or to anyone else who will listen) repeatedly about how they only accept a certain type of photo, or from certain blogs, or whatever it is you tell yourself to soften the blow of their rejection! I’ve been rejected so many times I’ve lost count!!! I STILL get rejected way more often than I get accepted – especially by Tastespotting!! But when I do make the cut, my blog traffic spikes dramatically. We have a love/hate relationship (love to get accepted, HATE to get rejected!), and I credit their exposure for getting me to this point so quickly. Though I have cussed them out mentally many, many (many many many many many…a LOT ok?) times, I’m grateful to them both! So work harder, learn the basics of lighting and exposure (again, Plate to Pixel people!) and keep submitting! Oh and do yourself a favor and pore over the submission guidelines and do your research! Sarah G. over at Tastespotting finds photos of half eaten food gross, hates cilantro, and won’t accept your photo (even if it’s amazing) if your post is boring or too personal (Uh oh, this post is toast! ha ha!!) (see Sarah, I have been paying attention!) Keep abreast of  what’s trendy or popular and blog about it – it will raise your chances of getting accepted by a lot! 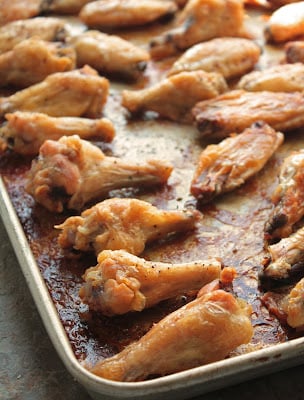 And so I’m finally moving on to the food which is why most of you are here! Sorry it took so long, guess I had a lot to say today! If this is your first time here I swear I’m not usually quite this wordy! But cut a girl some slack, it’s a big day for me! So, the chicken wings! Who doesn’t love them?? Nobody I’ve ever met that’s for sure! And since it’s playoff season and no Superbowl party worth attending is without a big platter of wings, this seemed like as good a time as any for this recipe! There are a million delicious variations on chicken wings but since I’m doing low carb this week I kept it simple and sugar free – though a sticky, sweet, teriyaki chicken wing is hard to beat! The classic buffalo wing (at least in CT where I’m from) is generally Frank’s red hot sauce and butter. I added a quartered habanero for more heat but that was my only flavor enhancement. One thing I don’t do is deep fry my wings. It’s completely unnecessary in my opinion. There is enough fat in the skin and wing to fry itself when you bake it in the oven.

The trick is to bake them with no sauce first until they are crispy and cooked through. Then a bath in the sauce and back in the oven where they will get nice and crisp and the sauce bakes on – yum!. There isn’t much worse than a soggy chicken wing. But if you put the sauce on while they are raw and then try to bake them, by the time they get crisp (if ever) the meat will be completely dried out and barely palatable. So bake first, then sauce, then bake – repeat if you like them really saucy! And another thing – do yourself a favor and don’t pay extra for the bags of frozen winglets! Fresh wings are cheaper and all you have to do is make two cuts per wing to get the same product! Cut off the tips (I use them to make stock) and then cut through the joint to separate the “wing” from the “drumette.” It’s cheaper and better quality than those freezer burned thingy’s they sell in a bag! 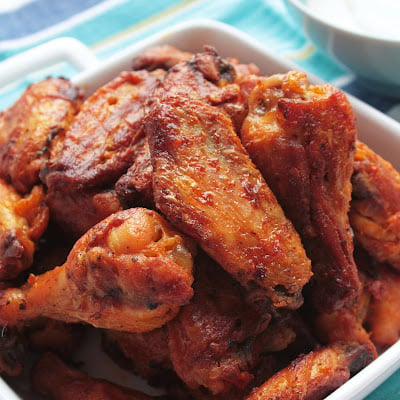