When you’re doing low carb for an extended time period, you can get really sick of the same old stuff. Meat is easy – it’s what to have with it that can be a challenge. For me anyway.

There is a misconception that people who follow a low carb eating plan live off of primarily bacon, steak, heavy cream and butter. Well that’s not really true for most of us.

You can eat those things, and I do (not much red meat though) but you still need to eat your vegetables. And oddly enough, I actually appreciate them more now than before I was eating low carb. 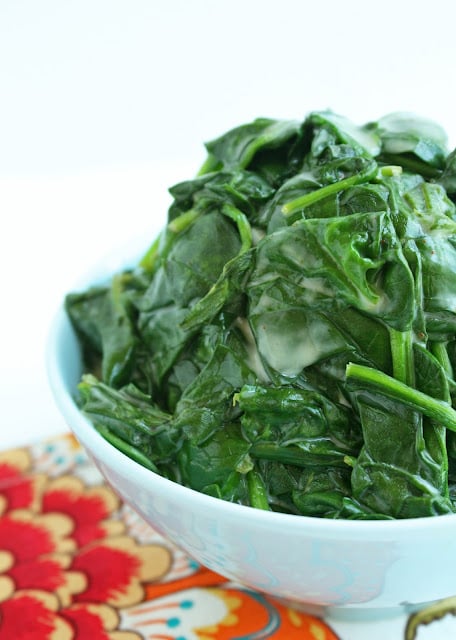 Spinach is a great option because it’s low calorie & low carb, while being very nutrient dense. I love it sauteed with garlic and olive oil, or on a low carb pizza. But after awhile I long for something a little different!

Enter this version that my uncle Tom (Chef at Mombo in Portsmouth, NH) introduced me to about 10 years ago when he was still working at The Four Seasons in Kona, HI. I don’t remember the exact recipe, just that it was spinach cooked in coconut milk and that it was delicious! This is more of a homage than a replica but I think it’s just as tasty.

Made with coconut milk it’s lightly sweet and has a touch of heat from the cayenne pepper. It only takes a couple of minutes to prepare and it goes with almost anything – I bet even your kids will like it!

That’s it! Super easy and incredibly tasty – not to mention chock full of vitamin A, iron, and lots of other healthy stuff! Hope you guys like it!