So it’s two for one day over here at IBIH! Why are you getting a bonus post today? Because I just couldn’t sit on it for another day, that’s why! 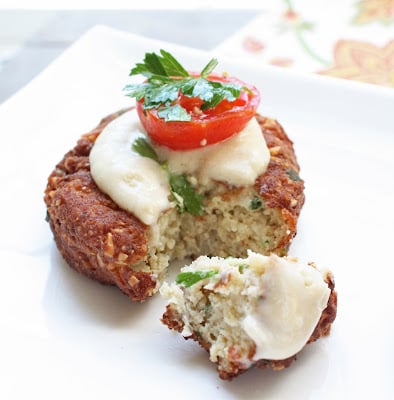 Recently I posted this low carb hummus recipe, and in the post I mentioned having an idea for a cauliflower-based falafel. Well I had so much cauliflower in my fridge that I finally decided to start testing it out this afternoon.

I wasn’t really sure how I was going to go about it, just had a few theories on what might work and what wouldn’t. I figured I’d at least start today, but never dreamed that it would turn out as well as it did on the first try!

This cauliflower-based low carb falafel recipe is so good that it was all I could do not to burst into song like a Disney princess when I took the first taste of it.

I wanted the crunchy texture of a chickpea-based falafel so I started with raw cauliflower, first roughly chopped, and then ground in the food processor. I was worried that it would be too mushy when it cooked, so to keep the chickpea-like texture, I thought maybe ground almonds might do the trick.

I used the slivered almonds you can buy in the baking section of most grocery stores and ground them to a still slightly chunky texture in my magic bullet. To that I added the classic flavorings of falafel, a little heavier on the cumin to hide any cauliflower flavor.

To help bind it I used coconut flour and eggs. 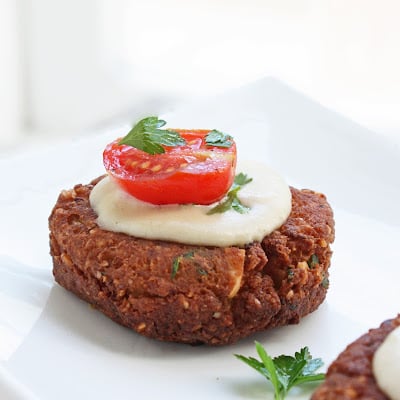 When I formed them they held together well, but I never dredged them and I worried that they wouldn’t brown. As you can see by the picture they DID and perfectly!

Super crunchy like falafel should be! And the interior texture was so good – the slight crunch of the nuts mimicked the chickpeas unbelievably well! The real test though, was whether or not I could get them by my husband and four year old son. Hungry Jr. pronounced them “delicious” and Mr. Hungry never even tasted the cauliflower!

This is a major win for me because he HATES cauliflower and can sniff out even a hint of it like a cadaver dog in a cemetery. So when he got home from work I’d already cleaned up the evidence and had him taste one. He thought they were great except for the slight crunch of the nuts which is a weird thing he has.

Never caught the cauliflower though and was surprised when I told him. YYESSSS! In your FACE!!! (LOL, just kidding! I didn’t really say that but I did think it and do a mental victory dance!)  They really are THAT good!

I can’t wait for you guys to try them and tell me what you think! If you like falafel, I think you’ll really enjoy them. If you’ve never tried falafel, then you’ll really REALLY enjoy them! Heck if you have a mouth, you are going to enjoy them! 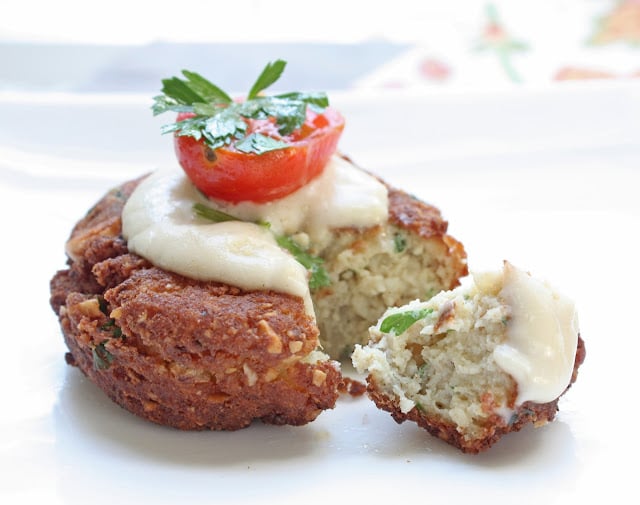 A Keto Falafel and Tahini Sauce recipe with a taste and texture that beautifully mimics the real thing! Gluten free, Low Carb, Keto.