I’m coming to you today with this awesome low carb pumpkin slab pie recipe on my brandy new Macbook Pro and I’m loving it!  Unfortunately, there’s been a bit of a learning curve which has slowed down my posting a bit.  Also, my old laptop has an issue with the modem so it won’t connect to the internet and I’ve been having to transfer things the old fashioned way on a memory card which has been SOOOOPER TEDIOUS.

That being said, this new Macbook Pro with Retina Display is my favorite purchase of the year, and if you’ve been on the fence about switching I highly recommend biting the bullet and doing it!

It’s shiny and pretty and it works like a dream.  The resolution is incredibly sharp which makes editing photos (once I get them all imported *sigh*) really fun – though I’m just getting used to Lightroom vs Photoshop and that’s another whole story!

There is lots I still don’t know about how to use it to it’s fullest, but I’m learning and will hopefully be back in full swing with posting soon!

AND you can expect some extreme overuse of emojis for awhile until I get bored (never happen) with the fact that I can easily add them to any post now!  ??? ?✨?Wheeeee! ???

Speaking of emojis, did you know there is no emoji for pie????

Emoji department take notice – someone is falling down on the job, I’m just saying.  Pie is amazing and surely deserves its own emoji(s) – amirite???

I don’t know about you guys, but I’ll take a piece of pie over a piece of cake any day.  My favorites (in case you lay awake at night wondering) are strawberry rhubarb, pecan, cherry, blueberry, and lemon meringue in that order.

Mr. Hungry’s favorite is apple – which I also like but it doesn’t make my top five.

Nor does pumpkin really, which begs the question – why on earth am I posting another low carb pumpkin pie recipe, when I already have a great one here on IBIH and yet none of my top five pies exist here on the blog??? ????? 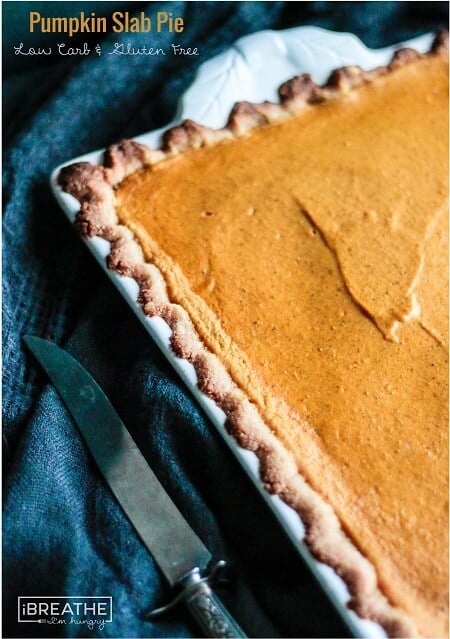 Aaaaaaannnnnnnnd – I don’t have a good answer for that.  I guess because low carb pies containing mostly fruit are hard to do – but I’ll work on it…

Submit your pie faves now to be added to my list of low carb and gluten free pie recipes to be made ASAP.

Maybe by the time I make more low carb fruit pies, emoji central will have gotten the memo that they need to represent said pies with their own emojis.  Fingers crossed.  (no emoji for that either btw)

Slab pies are all the new rage in case you didn’t know.  And lest you think it’s just a passing fad, let me come at you with some major pros of a slab pie over a traditionally shaped round pie…

First, a slab pie is much easier to cut and serve IMO.  With a traditional pie, your filling to crust ratio is much higher, and the steep incline on the sides means that it’s hard to serve a decent looking slice if that matters to you.  Usually the rim of crust falls off onto the plate at least, or the entire slice just disintegrates and collapses flat anyway under the weight of the filling.

Second, because the filling to crust ratio isn’t as high in a slab pie, you are less likely to end up with a bottom crust that is still raw on the bottom – and let’s face it, raw pie dough isn’t appetizing.  Also, the crust is my favorite part of the pie – so I’m good with more crust and a little less filling per bite. 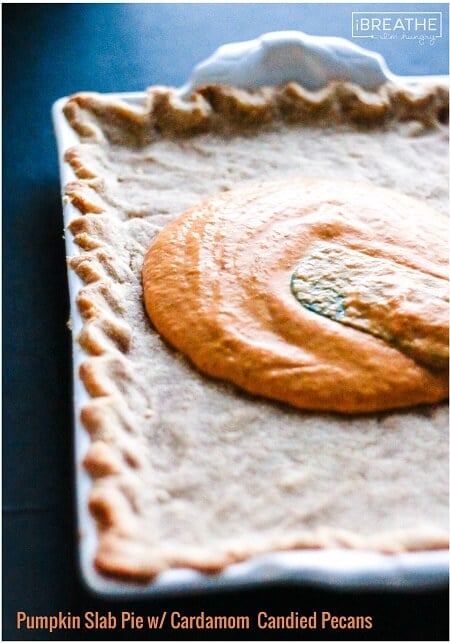 As a side note, the pan I chose for this low carb pumpkin slab pie was too shallow so I ended up having to bake the extra filling separately and the resulting filling on this pie was a little thin – though even then it was fantastic because that shortbread cookie crust is delicious on its own!

Third, a slab pie is preferable to a traditionally shaped pie when you have multiple dessert options and you want a small piece of everything.  ????? #firstworlddessertproblems

You can easily customize the size of your slice with a slab pie, whereas a traditional pie is hard to cut small or it just falls apart.  Still tastes good, just not as pretty.

AND, bonus fourth pro, if you’re doing a dessert and coffee buffet cocktail party style, most slab pies (and especially this low carb pumpkin slab pie) can be picked up and eaten easily by hand while standing and holding a plate or drink.

Nice when you don’t want to deal with utensils or you don’t have room to provide guests with tables and chairs if you’re entertaining in a smaller space. 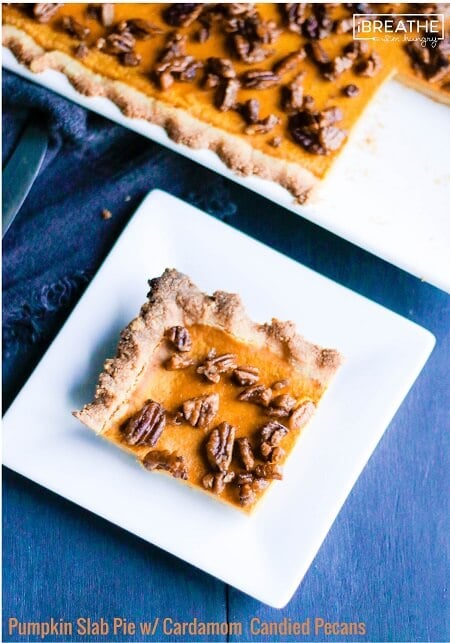 So there you have it.

And if you haven’t tried slab pie before, this low carb pumpkin slab pie is the perfect one to get your feet wet with!  I’m excited for you! ???

Hold up…. I can’t believe I’ve yammered on this much and HAVEN’T EVEN gotten to the Cardamom Candied Pecans yet!  This low carb pumpkin pie filling itself is pretty traditional – but it’s the candied pecans that take it to the next level.

Like wake up in the middle of the night thinking about that leftover pie in the fridge and getting up to have some, because going back to sleep without at least one bite of that buttery shortbread crust and creamy pumpkin custard topped with crunchy, sweet, spicy pecans on top IS JUST NOT AN OPTION, next level.

And I speak from experience on this.  TRUST. 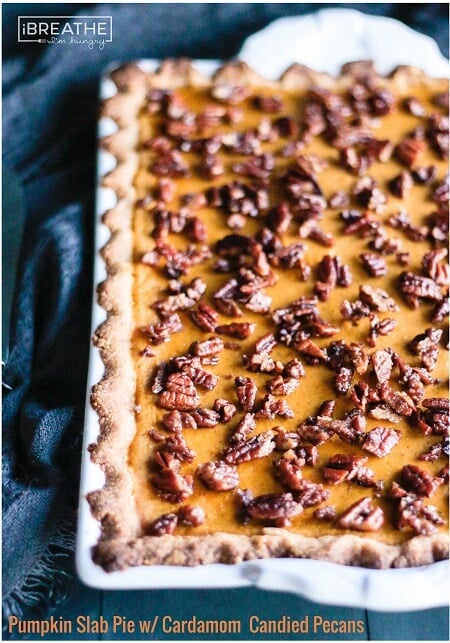 I chose to toast the pecans separately and then sprinkle them over the top after I baked the low carb pumpkin slab pie, rather than adding them to the top during baking as I’ve seen done before with nut toppings.

I’m sure you could do that, but since nuts go from mmmm nice and toasty and perfect to ugh black and bitter and burned like all get out in about 10 seconds, I decided not to risk it.

But if you want to live on the edge – go for it and save yourself the extra step of toasting them separately.

This low carb and gluten free pumpkin slab pie is my new favorite! The Cardamom Candied Pecans on top take it to the next level! Keto & Atkins friendly.

For the shortbread crust:

For the pumpkin pie filling:

For the candied pecans:

To make the shortbread crust:

To make the filling and pie:

To make the candied pecans:

New to low carb and need some help getting started?  Try out any one of my free low carb and keto menu plans with recipes and shopping lists and start losing weight fast! 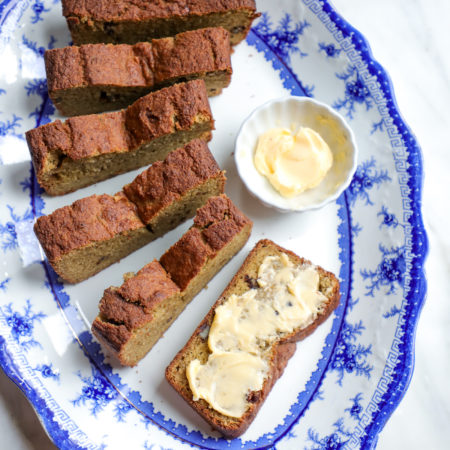 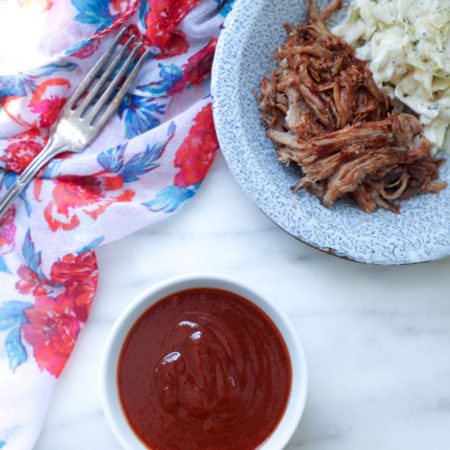