This is not an original low carb recipe idea – apparently people have been doing this for awhile and nobody told me!! I feel so robbed of all the years I could have been eating bacon wrapped low carb jalapeno poppers! ???

This is a case of ignorance NOT being bliss – but I plan to make up for lost time but eating low carb jalapeño poppers a LOT from now on! 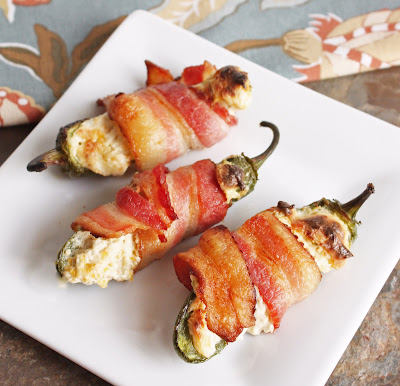 I have to credit this guy for making me see the light, because when I saw his photo on Foodgawker a few weeks ago I was blown away by the recipe possibilities!  I made my own version of course, but will forever be grateful to blogchef for the recipe idea!

My hacks:  I baked them instead of grilling them, and added salsa verde and cheddar to the cream cheese for some more flavor.  I made these low carb jalapeno poppers for our Superbowl gathering and they were a huge hit!

There are some things I would do differently next time I make them though.

1) use thinner bacon – I had thick cut on hand and it took too long to cook and was chewy.

2)  Par cook the bacon in the microwave for about 3 minutes to render out some of the fat and get it started.  While it’s still pliable I’d wrap it around the stuffed jalapenos and then bake it and I think it would get much crispier that way.

3) use toothpicks, I didn’t and a bunch of them unwrapped. 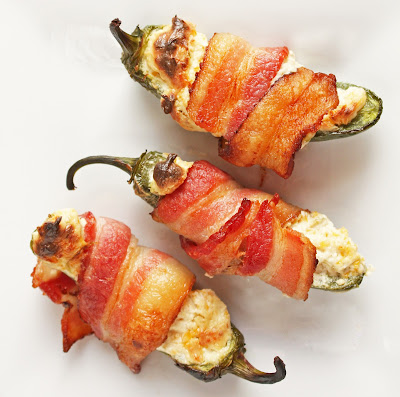 4)  Maybe, just maybe, instead of wrapping them I’d just lay a cut strip of bacon over the top because while I’m shocked to be saying this, sometimes less is more and I discovered that there is such a thing as too much of a good thing, even bacon!

Either way, these bacon wrapped low carb jalapeno poppers are SO tasty that I could eat them every day for at least a week (and I might!) before I even got close to being sick of them! 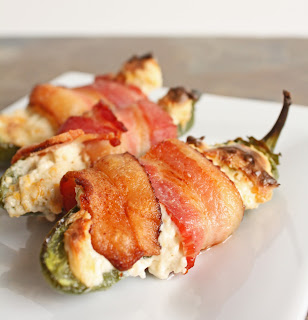 New to Low Carb or Keto and not sure where to start? Check out my free 3 Day Keto Kick Start and Menu Plan – it contains everything you need to know to start losing weight fast on a low carb diet!

You’ll get over 75 original recipes that can’t be found here on the blog for less than 15 cents each! And it’s some of my best work yet if I do say so! Bored with the same old low carb recipes? Looking for some new and delicious ways to keto on? I’VE GOT YOU COVERED!