I love corned beef hash. LOVE. IT. But here’s my dirty little secret – my favorite kind is from a can. I’m not proud of it but there is.

I know I should be shunning canned foods in favor of fresh but there are just some things that are deeply ingrained from childhood (like boxed mac & cheese!) and you can’t shake them. And don’t want to.

My husband loves it too but it’s something we rarely indulge in because it’s just so bad for you. I’m pretty sure when I do eat it I can hear the tiny screams of my arteries begging for mercy. I block the little whiners out because they can just suck it up once in awhile as far as I’m concerned! 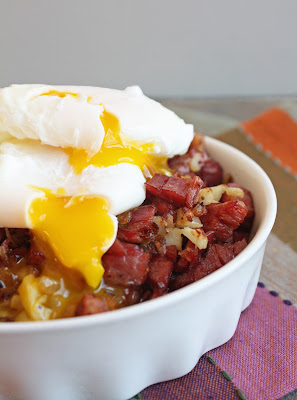 Alas, the salty, greasy, crispy, deliciousness that is canned corned beef hash is not on the menu at my house for awhile since I’m still going strong on low carb – so I created a homemade version using cauliflower.

I’ll be honest with you, I was skeptical going into it but thought it might be worth a try. Was it ever! While it doesn’t come close to the flavor of my beloved canned hash, it was really delicious in a different way and SO MUCH healthier for you! Even if you aren’t low carbing it this is a tasty alternative – or you can easily substitute diced potatoes for the cauli for a more traditional style like I did for my husband. Top it with two poached eggs and ahhh… breakfast bliss! 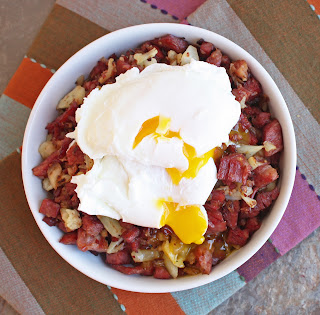 I used leftover corned beef that I had trimmed all of the fat off of so I added a little extra olive oil to mine at the end because it was drying out a bit. If you want to make this but don’t want to bother with making the corned beef first, they do sell corned beef in a can and you can cook that down, drain off the extra fat and then add your veggies and fry until browned.

You can omit all of the olive oil if you are using the canned stuff because it’s pretty greasy (and mmmm salty) to start with.