I wasn’t sure whether to call this recipe a low carb quiche or a low carb breakfast casserole, because honestly it could go either way.

Since it has a delicious crust, it could be considered a quiche (A crustless quiche isn’t a quiche in my opinion – it’s a frittata so STOP CALLING IT QUICHE ALREADY.)  But since I decided to make it in a casserole dish instead of a pie plate for easier serving, I went with casserole.

No matter what you want to call it, it tastes fantastic! 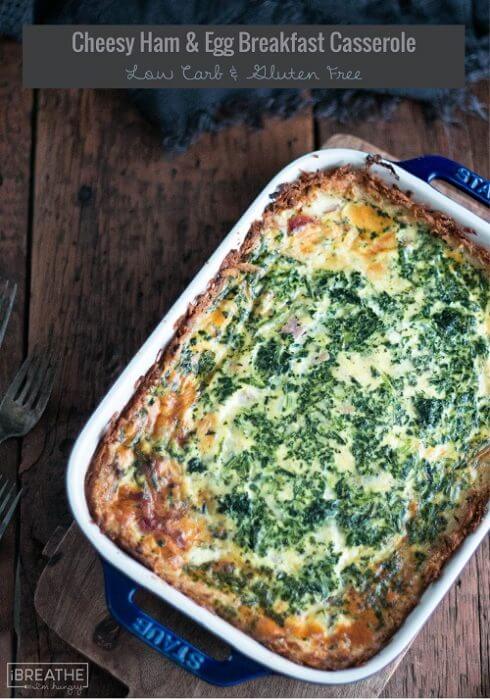 I opted not to go with a low carb pastry crust for this breakfast casserole, because I wanted something that didn’t require tedious rolling. Potato hash browns would taste amazing as a base, but the potatoes would definitely hike up the carbs in this dish. So I decided to experiment with shredded celery root, which I used with great success to make these low carb Rosti pancakes awhile back.

I wanted to be sure the celeriac crust held together, so I added some cheese, melted butter, and coconut flour to the shredded celery root. The end result was crispy on the top and delightfully chewy and pastry-like on the bottom – but without the work and frustration of a low carb pastry crust. 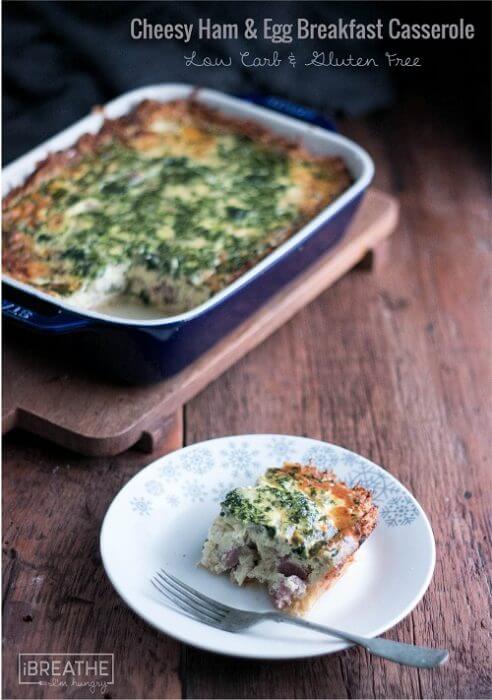 This is a two step baking process to get the celery root crust partially cooked before pouring in the egg filling – otherwise it would just dissolve into the egg mixture while baking.

I really think the delicious end result is worth the extra step of pre-baking the crust though!

This low carb breakfast casserole is great for just one person because you can portion it out to reheat all week – and it reheats great in the microwave btw. It also feeds a crowd and is hearty enough to be eaten on its own or you can cut it into smaller pieces for a brunch setup.

I would caution that if you are doubling this low carb breakfast casserole recipe not to just make it in one huge pan. The crust will burn before you get the middle set up all the way.

If you want to double or triple it for a large group, make it in several pans (I love disposable aluminum pans like these for large groups because then I just toss them and have less dishes) so that they cook all the way through before the crust burns! 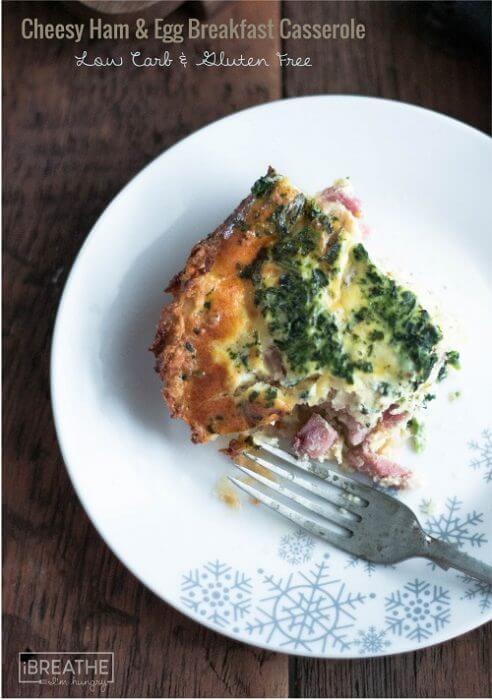 If you don’t want the hassle of the crust, you can make this as a ham and cheese frittata in either one pan like mine or in muffin cups for easy portion control – just be sure to use something non-stick and grease it well before pouring in the egg so they come out easily!

Whether you call this a low carb breakfast casserole, quiche, or a frittata, it’s a fantastic way to use up any leftover ham, and it will be sure to impress your family and friends with it’s amazing flavor and texture!

This delicious low carb breakfast casserole (or quiche) is flavored with ham, cheese, and healthy spinach! It’s got a crunchy low carb celery root crust as a base and reheats easily for days!

Had a little too much fun and need to drop some pounds? Get started today with my free low carb and keto menu plans to kick start your weight loss in 2015!