A delicious keto chicken and vegetable soup that can help you reach your weight loss goals! Make it once and reheat all week with great results! Try my 5 Day Keto Soup Diet for quick and easy weight loss! Most lose 5 lbs or more on this plan, which is perfect to get yourself back on track after an indulgence, or to lose weight for an event (wedding, vacation, reunion, etc.) 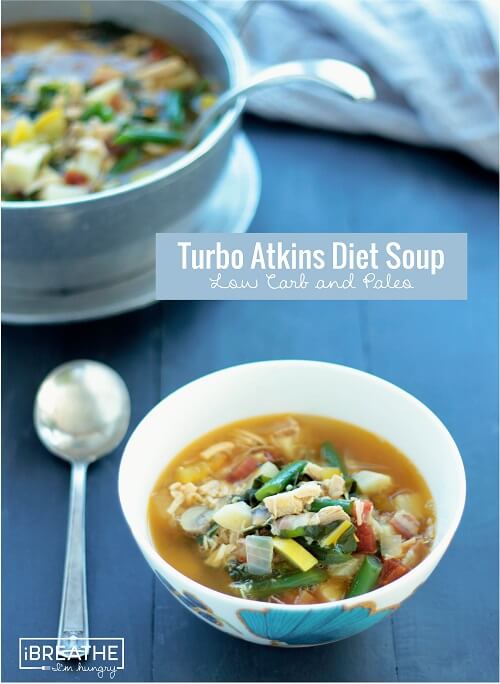 This past summer, Woman’s World Magazine reached out and asked me to create a low carb soup recipe using chicken and lots of healthy low carb veggies for the Turbo Atkins Diet Soup feature they were running in the November 9th issue.

Of course I wanted this low carb soup recipe to be delicious, but I also wanted it to be undeniably healthy – since so many critics are still under the misconception that a low carb diet is all bacon, steak and cheese, with little to no vegetables.

That’s just not true – or at least it doesn’t have to be if you are mindful about where your carbs are coming from.

This Turbo Atkins Diet Soup recipe is loaded with delicious veggies that are low in carbs, filling, and tremendously good for you – making it the perfect complement to any low carb plan.

In addition to being low calorie, low carb, keto, paleo, delicious and super healthy, there is nothing more comforting than a steaming bowl of soup when it’s gloomy and cold outside – making this low carb soup recipe a winner on all fronts!  ? ? ? ?

Now let’s talk about some of these ingredients – because every single one of them was chosen for a purpose! 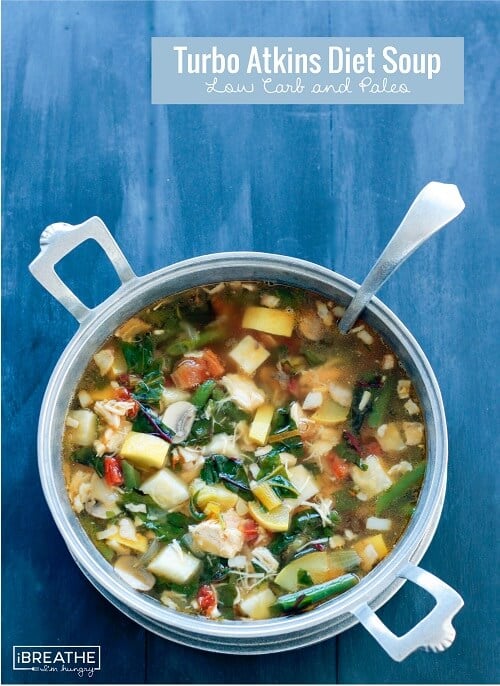 I went with chicken as my protein because it’s widely available and has a mild flavor that pairs well with all of these veggies.  Of course I added bacon, because it adds a lovely smoky flavor and a hint of decadence – it also provides some of the metabolism boosting fat in this recipe.

Celery root (Celeriac) is the perfect alternative to potatoes in low carb soup recipes (like this one) because it’s super filling and loaded with fiber, antioxidants, and a hefty dose of phosphorus, Vitamin K, and Vitamin C.  If you can’t find celery root you can use cauliflower, jicama, or even turnips as a replacement – DON’T SUB PARSNIPS AS THEY ARE TOO HIGH IN CARBS.

I included regular white mushrooms in this keto chicken soup recipe, because they are not only inexpensive and low in carbs, but surprisingly high in antioxidants, B-vitamins, and Selenium!  (as a side point, in the Woman’s World article they called for Vitamin D enhanced mushrooms – I’ve never heard of them, regular white or baby bella mushrooms are fine.)

The yellow squash adds color and texture, but it’s also high in potassium (especially important on a low carb diet) and Vitamin A. 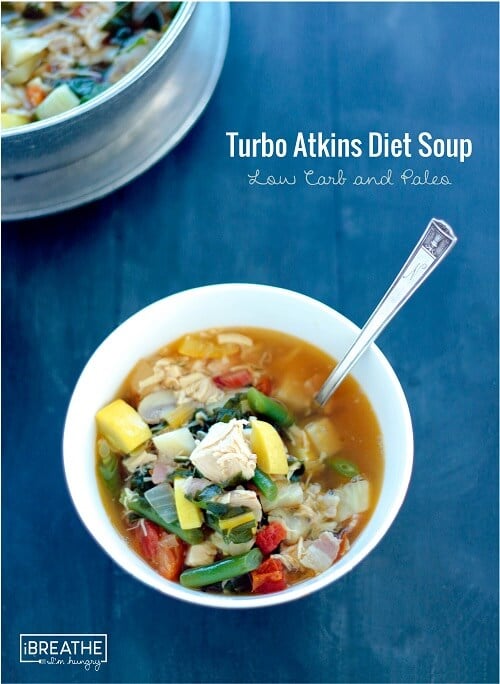 You can substitute any greens in the soup (EXCEPT KALE WHICH IS HIGH IN CARBS,) but I went with swiss chard in my keto chicken soup recipe because it holds up better in liquids than spinach, which tends to turn the broth muddy.  I also love the texture and color of the swiss chard stalks, and the fact that it’s low in calories and carbs but incredibly nutrient dense.

Garlic, onion, sundried tomatoes not only add flavor but are also powerful antioxidants and contain immune boosting compounds just in time for cold and flu season!

The green beans I added for color, texture, and low carb/calorie filler (not that they don’t also provide valuable nutrients), and the red wine vinegar added at the end of cooking balances out the flavor of the soup and gives it a mouth-watering quality that keeps you coming back for more.

You can also substitute apple cider vinegar if you prefer.  You’ll be amazed at the difference it makes – just be sure to add it at the end so you don’t lose the slight tang during the cooking process.

Finally, the fresh basil over the top gives it a punch of brightness and unites all of the other flavors, making every bite pure bliss.

All of those healthy and delicious ingredients combine beautifully to make this incredible keto chicken soup – which comes in at just 136 calories and 4g net carbs! 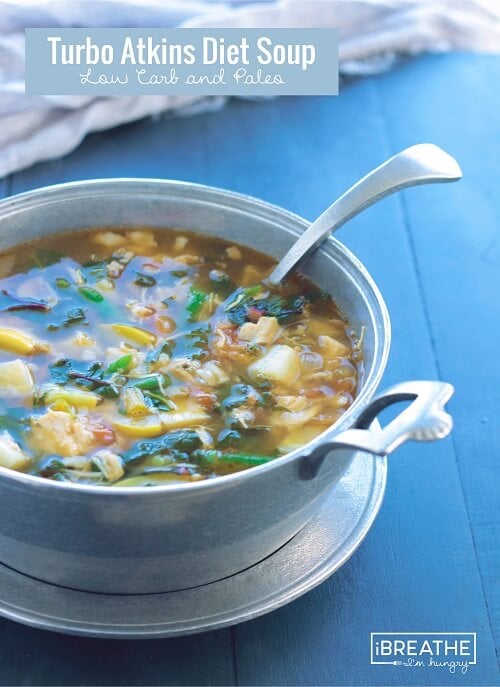 While there is some chopping involved, once you’ve made this big pot of low carb chicken soup you can store it in the fridge for up to a week or in the freezer for several months and have it at the ready whenever you want some.  (If you also happen to have some of my Sundried Tomato & Asiago Zucchini Muffins in there then you are winning at life my friend.) ?

I think the flavors in this low carb chicken soup get even better with time – and the people who tested it for the Woman’s World article agreed!

Replacing just one meal per day with a bowl of this hearty low carb soup will not only load you up with healthy vitamins and minerals, it is also a powerful weight loss tool because it is so filling and has so little calories!

Have it for lunch AND dinner and you could lose up to 10 pounds in one week, as did some of the test subjects for the magazine article!

If you give it a try be sure to let us all know how you do!

As per the comments and Facebook Group, quite a few are subbing in parsnips and kale, but as you can see by this list those are the highest possible carb options and can absolutely affect your weightloss on this plan! There is room for subs, but be smart about it per this list! 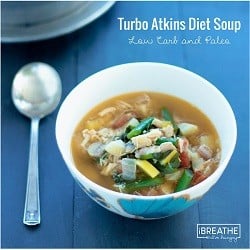 This delicious low carb soup recipe is loaded with healthy veggies and chicken. It’s so good it was featured in Woman’s World Magazine in November 2015!

Had a little too much fun and need to drop some pounds?  Get started today with my free low carb and keto menu plans to kick start your weight loss in 2016!