This Keto 7 Layer Dip is the perfect low carb appetizer for all of your party needs – or if you just have an insane craving for 7 layer dip but don’t want to blow your carb budget on beans. True story. 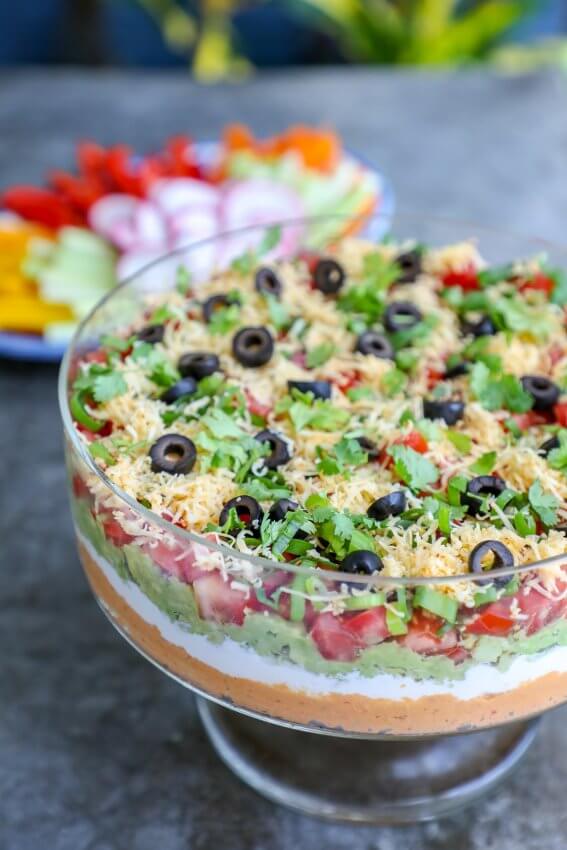 7 layer dip is a classic party appetizer that usually consists of layered refried beans, guacamole, sour cream, tomatoes, cheese, black olives, and scallions. Most of the ingredients fit perfectly into the keto diet – it’s only the starchy refried beans that are the problem. When I set out to create a Keto 7 Layer Dip, I mulled over my options and they were, frankly, limited.

How would I get both the texture and the earthy flavor of beans replicated in a satisfying way? Finally I settled on using a thick cauliflower puree, flavored with cumin and chipotle (among other things) to anchor the dip. 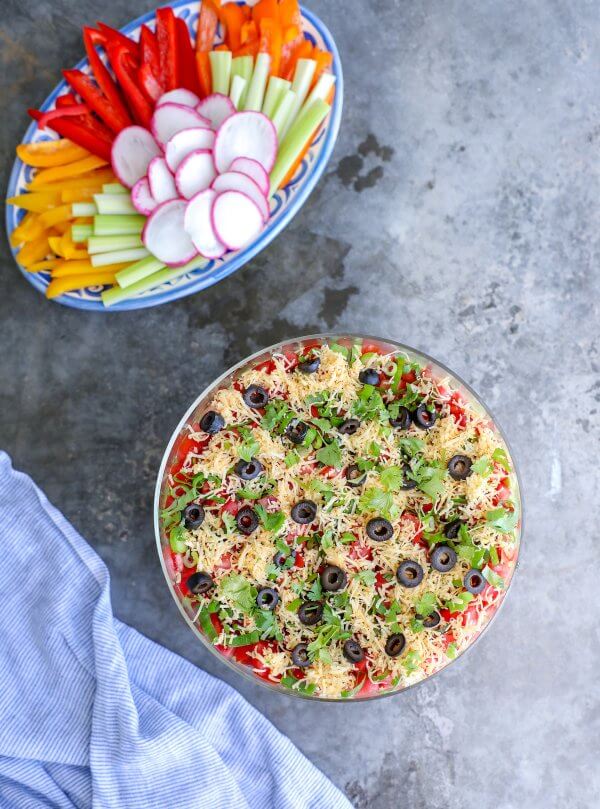 The idea was plausible – after all I’d made cauliflower hummus that was super tasty. But could it really work and keep the overall integrity and crave-worthiness of the classic 7 layer dip???

To test it out, I made the dip while we were shooting recipes on location at one of my favorite places on Roatan – Fuego Del Mar. As a side point, I’ve linked to their website so you can check it out for future vacation rental options – it’s incredible and I highly recommend it! Just so you know, they aren’t paying me to say this and I pay to rent it out same as you would – I just really, really love it there and would live there full time if I could! 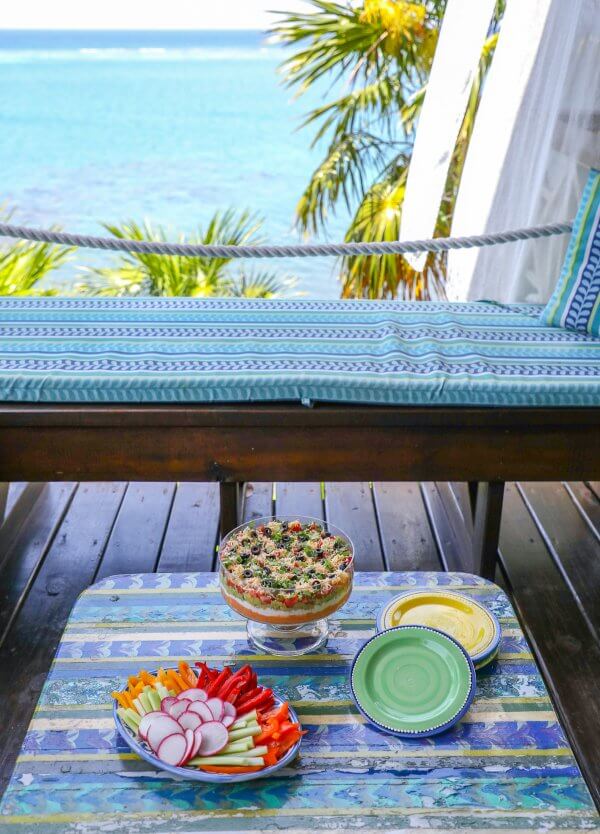 Anyway, we had some friends over to hang out at the pool one day after the recipe shooting was done, and I set this keto 7 layer dip out without telling anybody it wasn’t the classic version. I provided tortilla chips because none of them are on keto, and let them have at it. And I was on the edge of my seat wondering how it would go over.

Let me be clear that there were some SERIOUS picky eaters in this crowd. One of them was Mr. Hungry – a sworn hater of all things cauliflower, and another is a guy who pretty much hates everything that can’t be found sandwiched between the buns of a Big Mac. 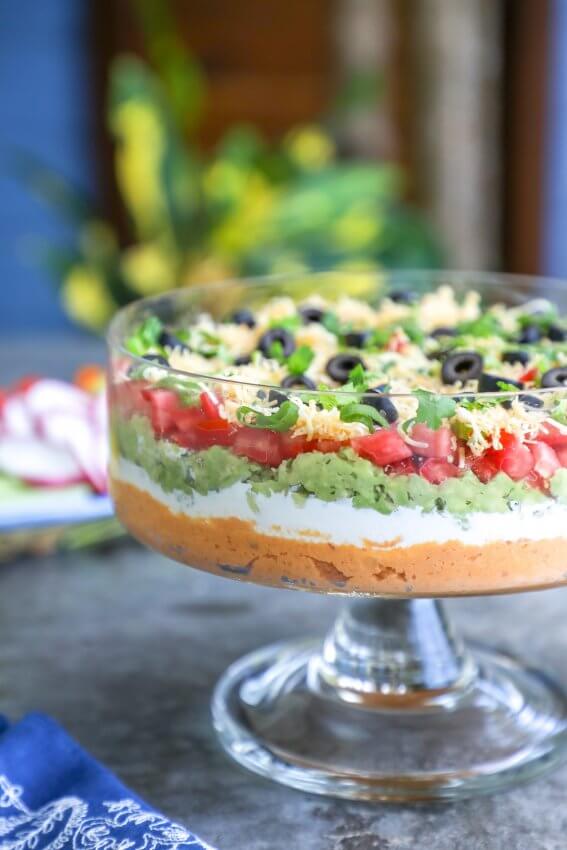 First there were lots of yummy noises and exclamations about it being delicious. Then after about 1/3 of the dip was gone, I got the question I’d been waiting for… “what’s in that bottom layer – that’s not refried beans is it?”

Expecting cries of “Ew gross!” and “I’m not eating that!!” I told them it was cauliflower puree. Imagine my shock when I got comments like “Really? It tastes great!” and “I never would have guessed!”

More importantly, they all kept digging in until the entire batch was almost gone – and later I got the incredulous “I can’t believe you got me to eat cauliflower!” comment at least three different times. It was a banner day for cauliflower my friends – I wish you could have been there. ? 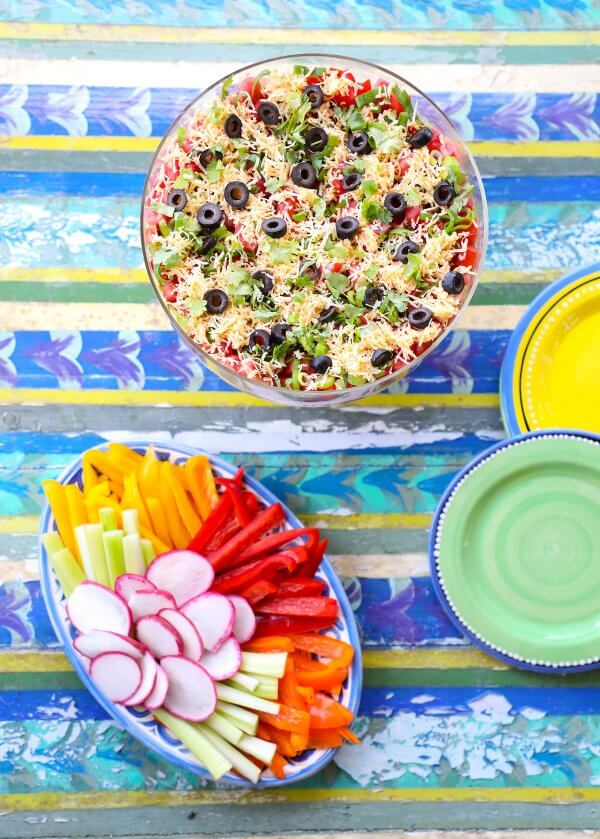 The good news is – you can recreate this scenario on your own now that I’m unveiling the keto 7 layer dip recipe here on the blog! And if you too can get cauli-phobes to chow on this low carb 7 layer dip unaware, or as willing participants who think it tastes amazing, please be sure to let us know in the comments!!!

Now let’s address the elephant in the room. Tortilla chips aren’t keto so what can you use as a satisfying vehicle to get this keto 7 layer dip into your face? Of course there are veggies that can be used as shown in the photos. I’m partial to celery and radish chips in that case. 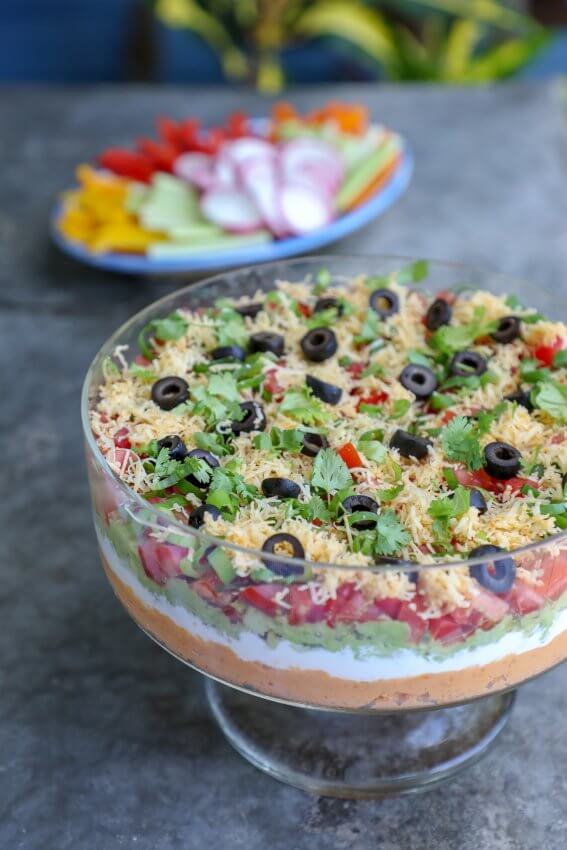 There are also plenty of other keto friendly dippers you can use and I’ll list some options as follows:

Any and all of the options listed about will make the perfect scooper for this keto 7 layer dip recipe, and you can always provide regular tortilla chips for your non keto guests like I did as well!

I’m always thrilled to get your feedback on my recipes, but this is one I’m really excited about! I can’t wait to hear what you thought of it – did the cauliflower puree work for you? How did this keto 7 layer dip stack up against the real thing with your family and friends?!?! Did it pass the cauliflower haters test?!?!?

Don’t keep us in suspense I beg you! Make it and report back ASAP! ?

This Keto 7 Layer Dip is the perfect low carb appetizer for all of your Mexican-themed party needs – or if you just have an insane craving for 7 layer dip but don’t want to blow your carb budget on beans.

For the cauliflower layer:

For the avocado layer:

To assemble the dip:

For the Cauliflower layer:

For the Avocado Layer: