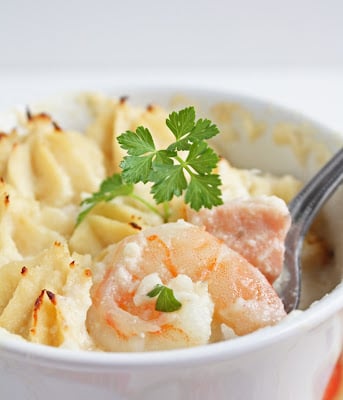 My week of posts celebrating comfort foods from the British Isles continues with this delicious seafood pie. Like the the corned beef hash and bangers & mash recipes, it features cauliflower as a low carb alternative to the traditional potatoes.

This is by far my favorite of the three recipes so far. When I researched traditional fish pies I found that some contained mushrooms, peas, carrots and/or other things I either didn’t find appetizing, or that increased the carb count more than I wanted. I decided to put a New England spin on it using the flavors of our famed clam chowder as a base. 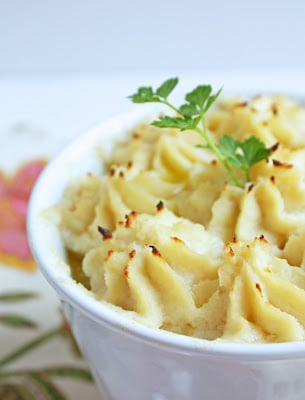 I added Shrimp, Salmon and Swai (mild tasting white fish) for my seafood. I love chowder and since it features chunks of potato I figured a cauliflower “crust” could stand in for the potato in this case – kind of a deconstructed thing. This “pie” has all the elements of a delicious chowder but also something I didn’t expect – the cheesy cauliflower puree that I used on top added a subtle sweetness that tasted exactly like buttery ritz crackers like you might find in a baked stuffed shrimp!!! 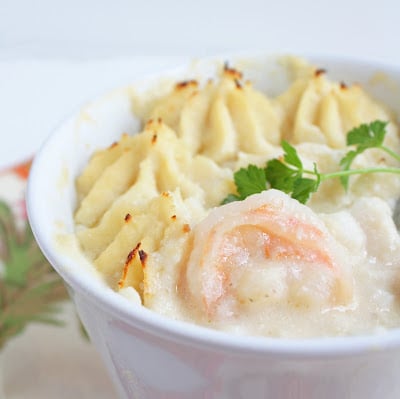 It wasn’t until the last couple of bites that I recognized the flavor, but when I did it was like some kind of miracle! It wasn’t just an ok sub for a mashed potato top, it was so good that even if I add potatoes back to my diet at some point, I’ll always make this dish this way – it’s that good! I have no idea why it works, but it does and I already can’t wait to make it again! Hope you guys like it and can’t wait to hear what you think!