These smoky tuna pickle boats are the perfect keto friendly after school snack, or they even make a great low carb lunch on the go option – no fork required! Not a fan of pickles? You can use small cucumbers instead!

In other news, we spent a week in the Cayo region of Belize recently and it was incredibly beautiful! ✈️ ? ? ? ? I’ll share some stories and photos of that after the tuna pickle boats recipe!

Speaking of the recipe, some of you might be thinking – can something as simple and easy as tuna fish in a pickle even count as a recipe? Is Mellissa off her rocker? DOES IT GET ANY LAZIER THAN THIS? 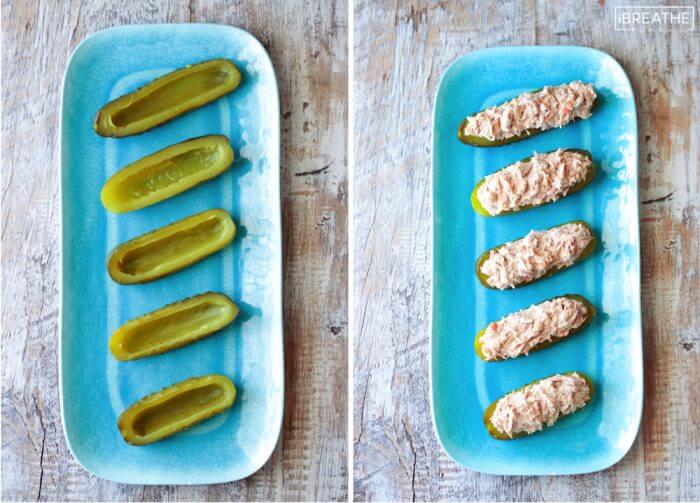 Well I’ll tell you. I’ve been doing some research on what people are pinning, sharing on Facebook, etc. and lately it seems that easy recipes are winning the day. ? ? ?

Life is getting busier and busier, and while a lot of people like looking at pictures of beautiful food and dream of making it someday when they’ve got oodles of time on their hands, what people really need right now is easy, healthy, fast, low carb foods that they can eat on the run or feed their kids after school.

Because let’s face it – Summer is ending whether we like it or not. ? ? ? So while you desperately want to be lounging by the pool with a margarita in hand and not a care in the world ?? – the real life grind of getting the kids off to school and us back into the swing of having a Responsible. Adult. Schedule. (please no) is the ugly reality we’re all facing. ? ?? ?

And so I bring you these super easy and TASTY smoky tuna pickle boats. They have a fun factor that your kids will get a kick out of (they can also help make them,) and even adults will enjoy eating these.

Well me anyway – not sure if that counts as an adult… ? 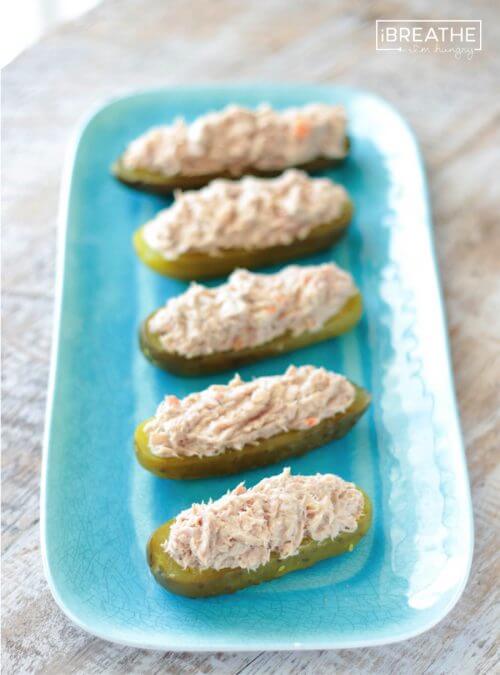 I used a combination of regular canned tuna and smoked canned tuna in this recipe – but if you can’t find smoked you can just add a couple of drops of liquid smoke or omit it altogether. The smoky flavor elevates these tuna pickle boats a bit, and honestly they are so good that I’d serve them as a low carb game day appetizer, and I’m positive they’d get devoured.

If your family isn’t a fan of tuna or someone has an allergy, you can also use canned salmon or even cooked, chopped chicken instead. The foodie in me wanted to add lemon zest, fresh dill and capers, but it went against the point of keeping these smoky tuna pickle boats easy and kid friendly – you should feel free to dress up or customize the tuna portion any way you like though! 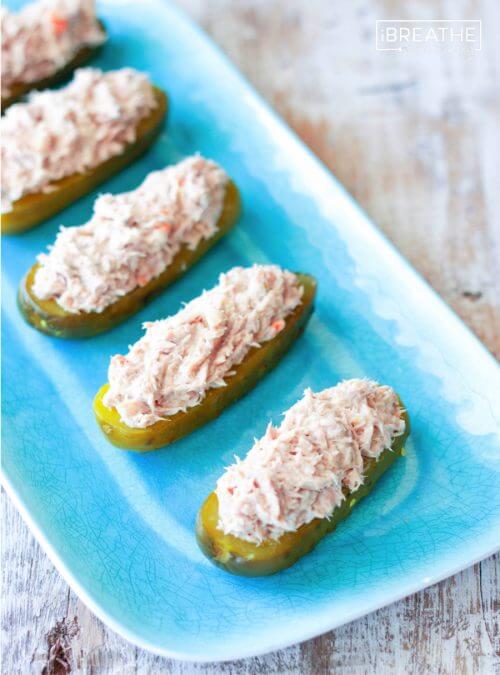 As a side note – growing up we called it “tuna fish” – as in “Can I have a tuna fish sandwich?” Which is weird because we don’t say “I could really go for some salmon fish” or “some trout fish would be really good right now.” So why tuna fish? Did you guys grow up saying tuna fish or is it just me? Inquiring minds want to know….

It doesn’t really matter whether you use the tuna from a can or from a pouch, but you want to have about 2 cups of tuna for this recipe so if you’re using pouches be sure to get enough of them.

Don’t add salt to your tuna salad – the pickles will be plenty salty so you don’t need it!

If you don’t like pickles or sodium is a problem for you, try this in fresh cucumbers instead – the nutrition info will stay about the same.

These smoky tuna pickle boats are the perfect keto friendly after school snack, or they even make a great low carb lunch on the go option – no fork required! Not a fan of pickles? You can use small cucumbers instead!

Now, for those of you that are interested in our life in Belize, we spent some time in the Cayo region on the mainland last week and it was gorgeous! 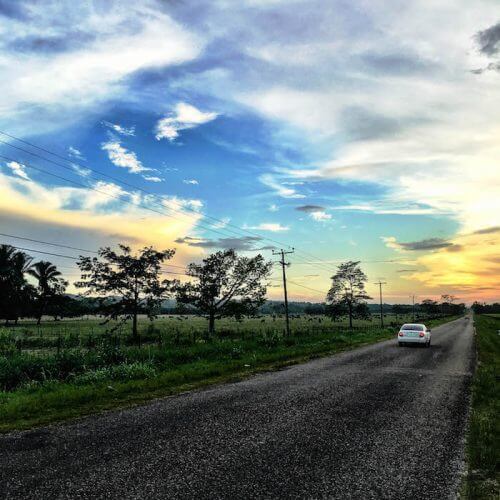 We stayed at the Maya Mountain Lodge just outside of San Ignacio and it was rustic, but lovely, and has a cute open air restaurant right onsite (and the food is fantastic!) 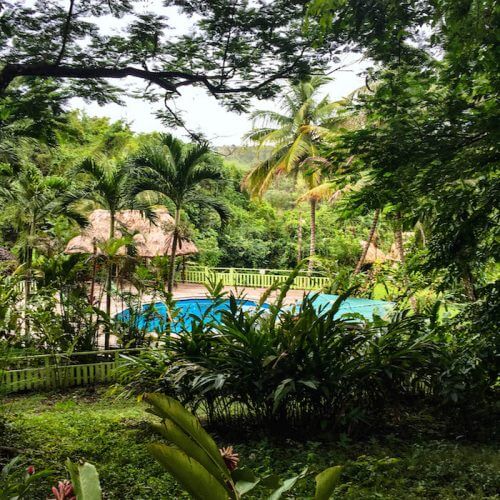 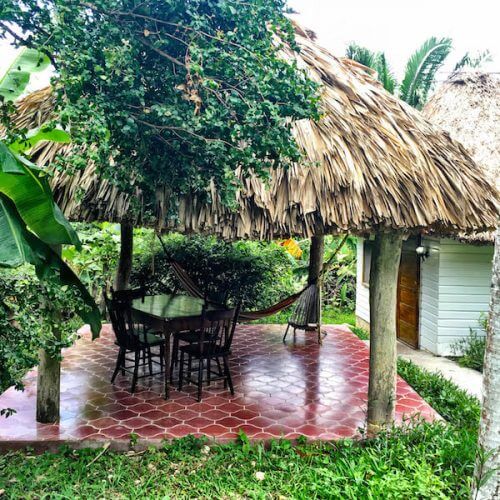 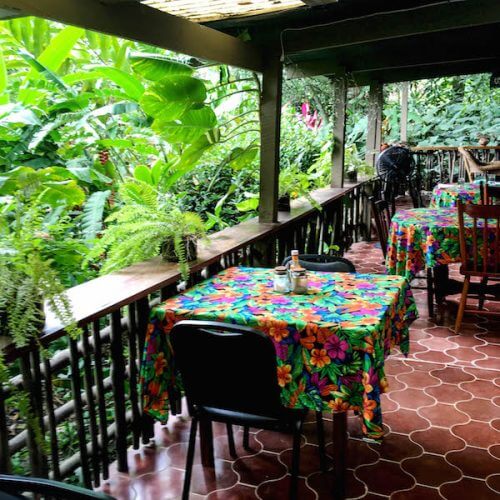 Unfortunately, the first cottage we had was on the outskirts of the grounds and had a tall, thatched roof. Sounds nice, right? 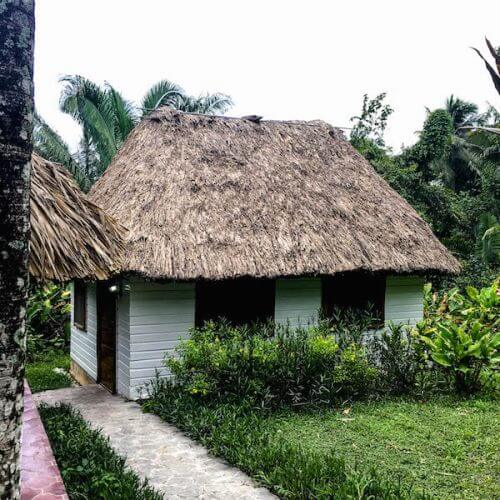 We soon found that the thatched roof was home to all sorts of creepy crawlies, most disturbing being the giant spiders and scorpions!

It rained a lot that weekend and it drove even more of the bugs to find shelter – most of them in our cottage apparently. They stayed hidden during the day, and we were gone most of the time anyway, but at night they would come out and explore.

The first night, our friends in another cabin woke up to a big scorpion in their sink. I was freaked out but though it was a fluke.

The second night, I saw one heading down one of the ridge poles straight for Hungry Jr. who was in the top bunk watching a movie on his iPad. Mr. Hungry was able to rescue him and then kill it – I slept ok, naively thinking “what are the chances there are more than one in here?”

The third night, we were getting ready for bed and a huge one strolled out from under the nightstand right by my foot and Mr. Hungry killed it – he was a fighter though and didn’t go quietly. 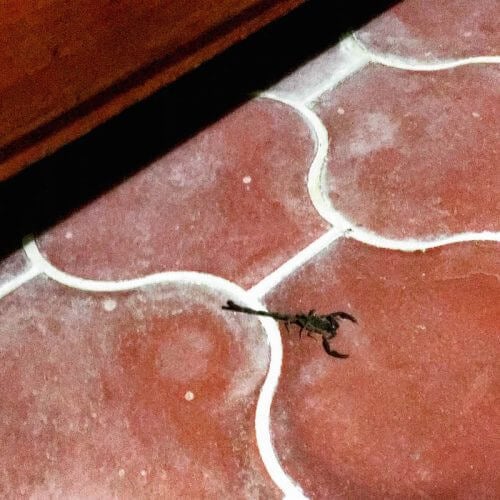 That unnerved me so I laid awake staring up at the thatched ceiling above us.

We’d left the bathroom light on so I could see pretty well, and suddenly there was another big one crawling out from the thatching and heading down the wall. I shook Mr. H awake and begged him to get it or I’d never sleep.

Because the roof was so high, he couldn’t reach it, so he was going to throw a shoe at it. I told him if you miss it’s going to go back into the thatch and I’ll lose it. Well he missed, and goodbye scorpion. Except I could hear him moving around and every few minutes he’d emerge, just out of reach but right over our bed. No way was I sleeping. Mr. Hungry however went right back to bed and fell asleep immediately. UNDER THE SCORPION. I kid you not.

I kept watch in case it got back in range and finally it was coming down the pole near the bunkbed where Hungry Jr. was sleeping in the bottom bunk. I woke up Mr. H and he climbed up top to kill it, but didn’t have his contacts in and missed it – back into the thatch it went AGAIN! Meanwhile, another large scorpion emerged about six feet away and I could hear the creepy scratching sound of more of them on the other side of the room.

Oh and I forgot to mention the GIANT spider that we killed that was lurking underneath our bed while we were scorpion hunting earlier. My nerves were shot and I was SO TIRED, and Mr. Hungry had told me in no uncertain terms that he was done and not to wake him up again. At that point, I considered going to sleep out in the rental car.

But since I’d have to run the gauntlet of hanging spiders and other horrible things on the long jungle path to the parking area in the dark alone, I just turned the AC up as high as it would go and got under all the covers and dozed on and off until morning. LONGEST. NIGHT. EVER.

The next day a lot of people had checked out so I asked if we could switch to a different room that didn’t have a thatched roof, and the rest of our stay was comfortable and uneventful. 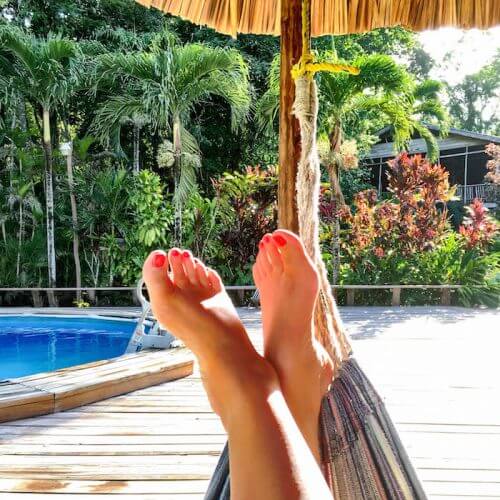 The hotel assured me that they hadn’t had this problem before and that they spray the cabins every few months, but apparently the heavy rains had driven the scorpions inside. I believe them – but if you stay at Maya Mountain Lodge, be sure to ask for a cabin with a zinc roof, NOT a thatched one, just in case!

Some of the highlights of the trip were just the driving around – the views were so beautiful on the way to Spanish Lookout, with mountains in the background and hilly pastures full of cows in the foreground. It reminded me of Virginia, but with palm trees and banana trees everywhere! 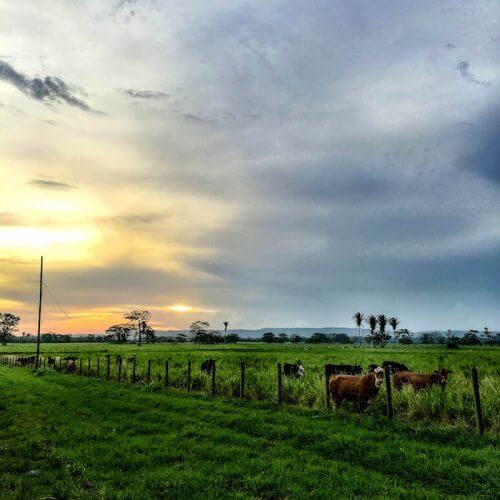 We visited a small Mayan ruin right in San Ignacio called Cahal Pech that was pretty cool and didn’t require any arduous hiking (I sprained my toe on the trip, so walking was hard) – it’s one of the oldest ever discovered in Belize, and has some beautiful architecture! 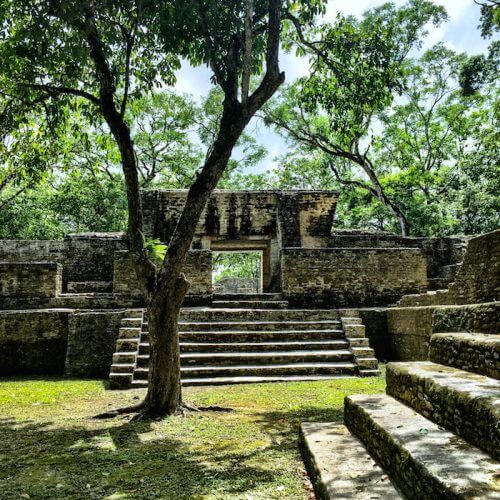 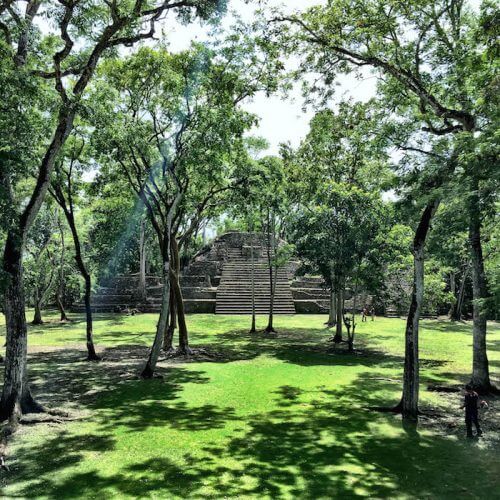 Another highlight was the Green Iguana Conservation Project, also in San Ignacio. They collect Green Iguana eggs, hatch them, and raise them in captivity until they are 5 years old and reach sexual maturity – then they release them into the jungle.

Apparently the locals find them delicious, so they became endangered awhile back on the mainland. Mmm….tasty. 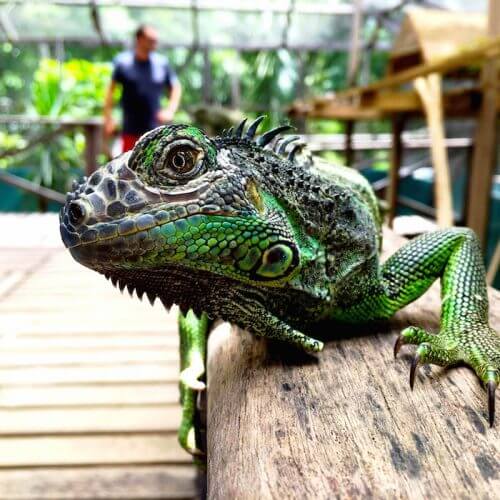 As a side point they appear to be thriving on our island, we’ve got at least five big ones living behind our house and we regularly feed them bananas and pineapple now.

Anyway, the ones in the enclosure were super tame and liked to snuggle, so they would literally climb up your pants leg to your shoulder and settle in. Believe it or not it was really cute. 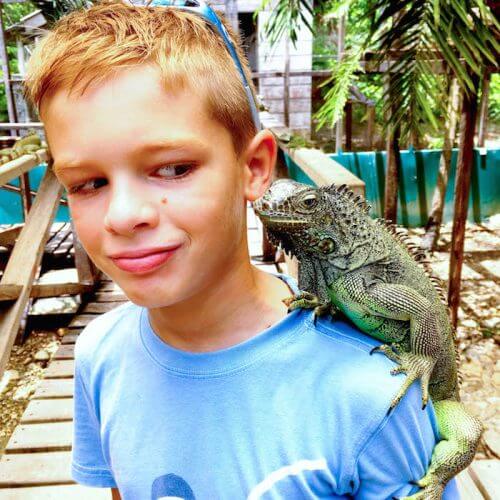 We all had a blast feeding them and getting up close and personal. I highly recommend it for kids and adults if you’re ever out that way – it’s not expensive and only takes about an hour or so but it’s super fun. 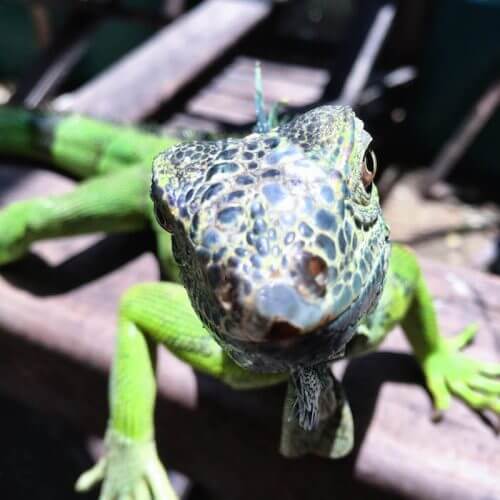 Next time we’re out that way I’m going to take my good camera out for the day and really take the time to get some good photos – there is so much to see and do, it really is a paradise out there.

Incredible birds, insects, flowers, and beautiful waterfalls everywhere – though I didn’t get shots of those on this trip unfortunately. Next time we’ll try cave tubing and some of the other ruins! 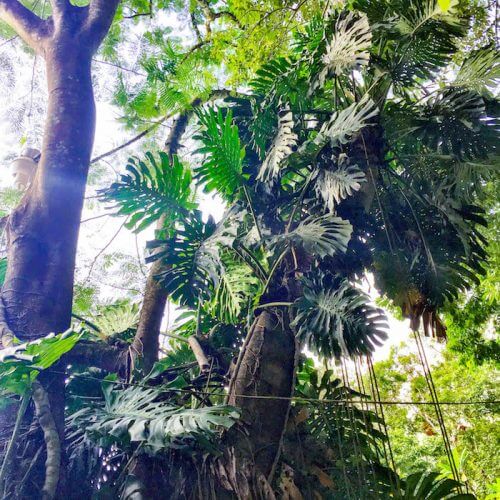 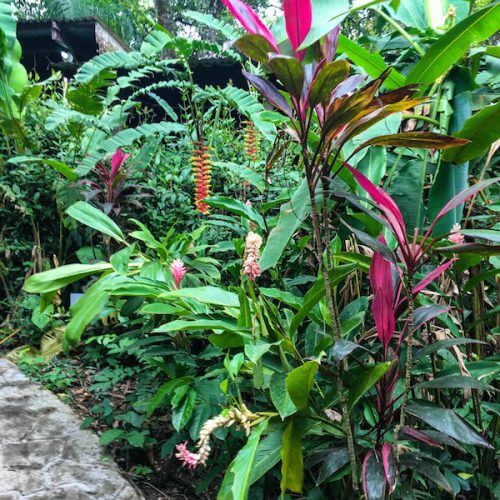 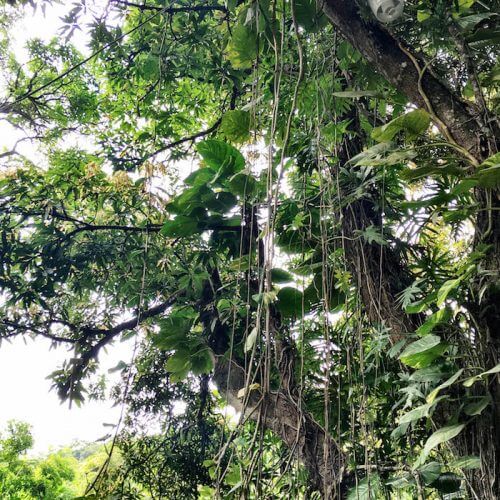 Now we’re back to regular life on the island, and like you we’re getting into a schedule of work and school. Sigh.

I’ve got lots more recipes coming up though and some videos planned also, so stay tuned!