A couple of weeks ago I made this Baked Ham with Apricot Cranberry Glaze and had a bunch of ham leftovers that I wanted to use up in some low carb recipes.

Using some of the ham leftovers in a soup recipe was a no-brainer, especially since I had a lovely ham bone ? to turn into a nice stock. I boiled the daylights out of that leftover ham bone until my broth was a hard block of gel when cooled, and then I used it in this delicious keto cauliflower & ham soup. 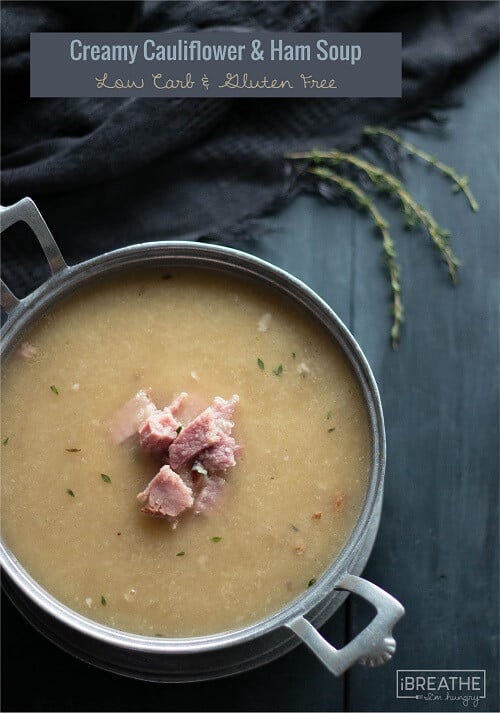 If you don’t have a ham bone (or any extra time) lying around, you could definitely make this keto cauliflower & ham soup with a store-bought chicken stock, but I’d toss in a couple of drops of liquid smoke to get a similar smoky flavor as a ham bone stock.

Even without the liquid smoke you’ll have nice flavor, but I’m a huge fan of liquid smoke ♨️ in low carb soup and sauce (mmm…BBQ) recipes, so you won’t go wrong if you pick some up. Just remember that a little goes a long way – one or two drops is usually all you need to get an authentic smoky flavor! 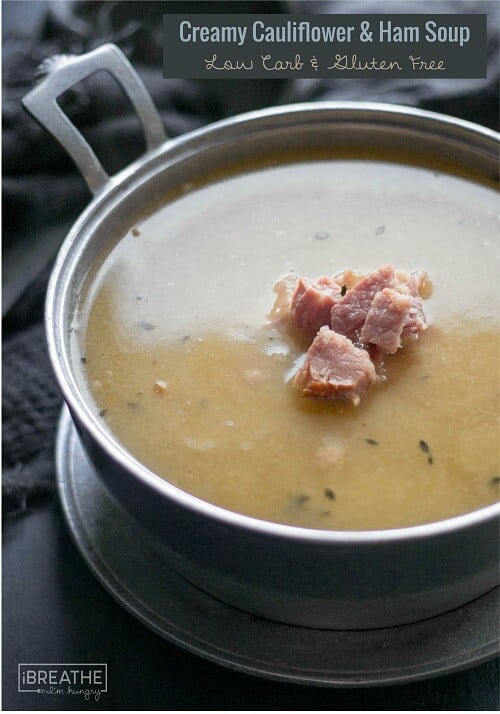 This keto cauliflower and ham soup couldn’t be easier to execute! All you need to do is simmer your cauliflower florets (I used frozen which was easy peasy) in the ham stock until tender, blend, then add the leftover ham and a few other ingredients!

I will say that an immersion blender is the easiest way to get the job done – you just plug it in, blend the soup right in the pot, and then wash the attachment. No muss, no fuss.

You can also transfer the contents to a large blender and blend it that way – it’s a little more work but will definitely get the job done! 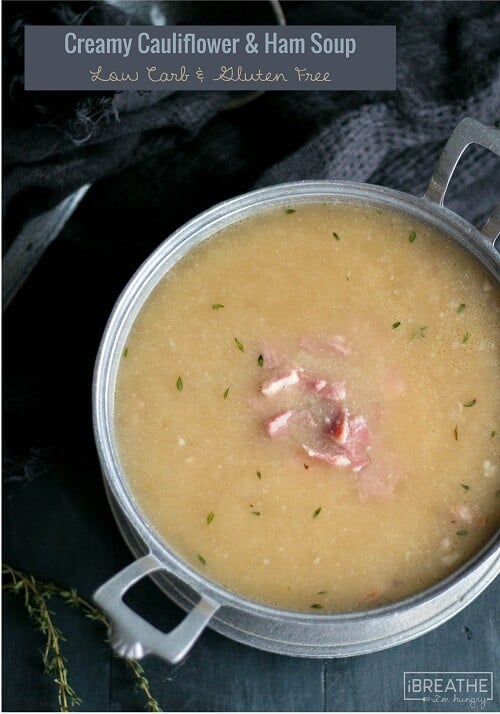 This keto cauliflower and ham soup is hearty and comforting – it also reheats (even from the freezer) really, really well.

As a side note, I opted to make this low carb cauliflower soup recipe primarily dairy free as well – meaning it’s Whole 30 compliant in case you’re planning to detox in January like so many people do. Simply replace the butter with ghee, bacon fat or coconut oil if you’re avoiding dairy for any reason!

If you aren’t dairy free, then you can add a little heavy cream to this soup to make it even richer and more sumptuous – not that it needs it honestly! 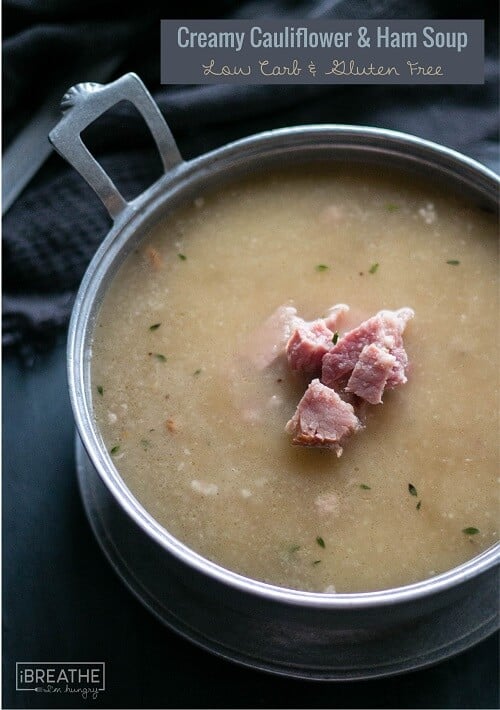 This is the perfect keto cauliflower soup recipe to help whittle off some pounds in January if you overindulged a little – because it’s not only low carb, it also comes in at only 125 calories for a satisfying one and a half cup serving! That’s a win/win if I ever heard of one! ???

Perfect for lunch or dinner, this keto cauliflower and ham soup would be even more amazeballs with one of my low carb Sundried Tomato & Asiago Zucchini Muffins! ????

This easy and delicious low carb cauliflower soup recipe is a great way to use up leftover ham! It’s also gluten free, dairy free, keto, Paleo, and even Whole 30 compliant!