These Keto Stuffed Artichokes in the Instant Pot make the most delectable first course or side dish! Just be careful, because they are likely to outshine all of your other offerings at the table!! 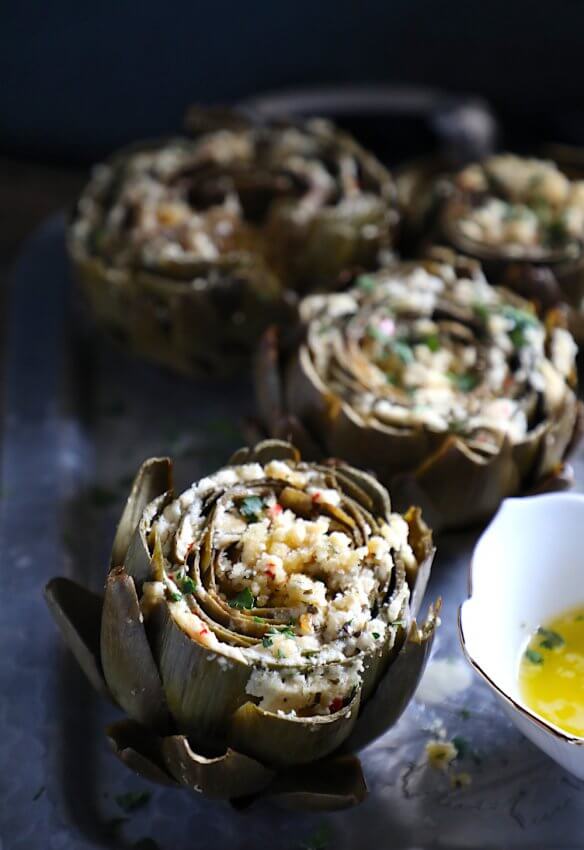 Where my artichoke lovers at? ??‍♀️ This one’s for you! I know this Keto Stuffed Artichokes post will never go viral because the poor artichoke is not the most popular of veggies. I’ll grant you, they are a pain to prep and even to eat, but the results in my opinion are so worth it!

For those of you that haven’t yet joined the #artichokelovers club, it’s time to get on board! Intimidating at first glance, these Keto Stuffed Artichokes in the Instant Pot are worth the effort it takes to get to the good stuff, and they have a starchy quality to them that feels like cheating but is actually keto friendly! ??

I love artichokes in all forms – marinated hearts, roasted and served with tarragon butter, deep fried (had them for the first time in Florence, Italy last summer and they were AMAZING,) and of course paired with spinach and lots of cheese in my Spinach & Artichoke Dip Cauliflower Casserole.

These Keto Stuffed Artichokes tho? Right at the top of the list. For real.

I was worried that cooking these Keto Stuffed Artichokes in the Instant Pot was going to be a waste of time, an epic fail even, but when I took the lid off the most amazing smell came out – so much so that even Hungry Jr. came out of his room (a miracle in itself) asking what I was making that smelled so good.

I wished they were browned and even considered popping them under the broiler just to crisp them up, but didn’t have time so I just went with it. After photographing them, I tasted a piece and HOLY MOLY were they delicious!

I gave Mr. Hungry a piece with stuffing and butter on it to test out, and he actually got up and came over to the kitchen to start eating more. We stood there over the platter decimating these Keto Stuffed Artichokes and chatting about random stuff at 11:30 am on a rainy Thursday. It was like an impromptu date morning – brought to you by artichokes. Who knew?

At one point, I got worried that he was enjoying these artichokes so much he was going to eat my share – so I ate a little faster to make sure he didn’t. I ACTUALLY HAD TO FIGHT HIM OVER A VEGETABLE.

In 25 years, this is a landmark day my friends. People who know us personally (and especially his parents) know what a huge deal it is – the man hates almost all vegetables. Like, really really hates them. So if that isn’t a resounding endorsement for these Keto Stuffed Artichokes, I don’t know what is! 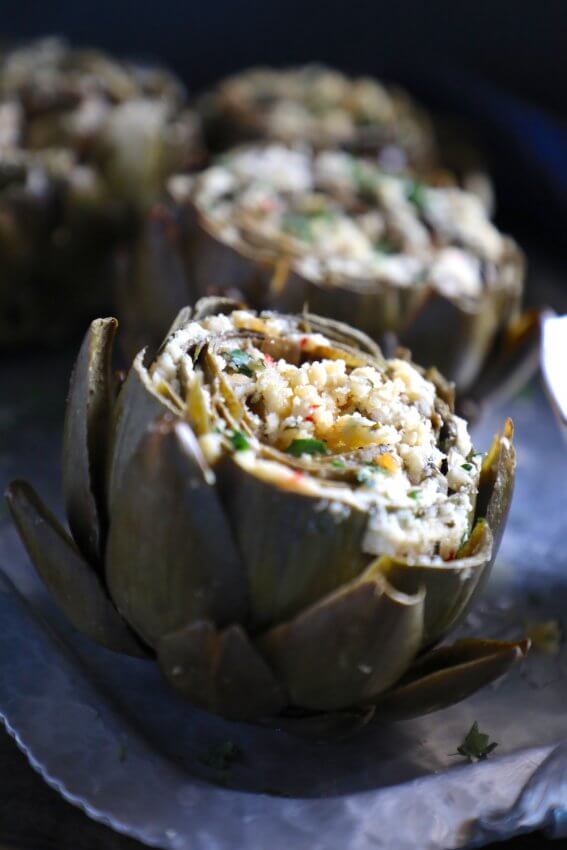 For those of you that aren’t sure how to prep an artichoke, I’m providing a link to a great video on how to prepare artichokes, since I didn’t have time to make one for you! In this video, he doesn’t remove the center (choke) with a spoon like I recommend doing, but I describe how in the recipe and it’s not difficult, just a little tedious.

It’s absolutely worth it to remove the choke before stuffing though, because then you aren’t messing with it when you (and your guests) are trying to eat these Keto Stuffed Artichokes. 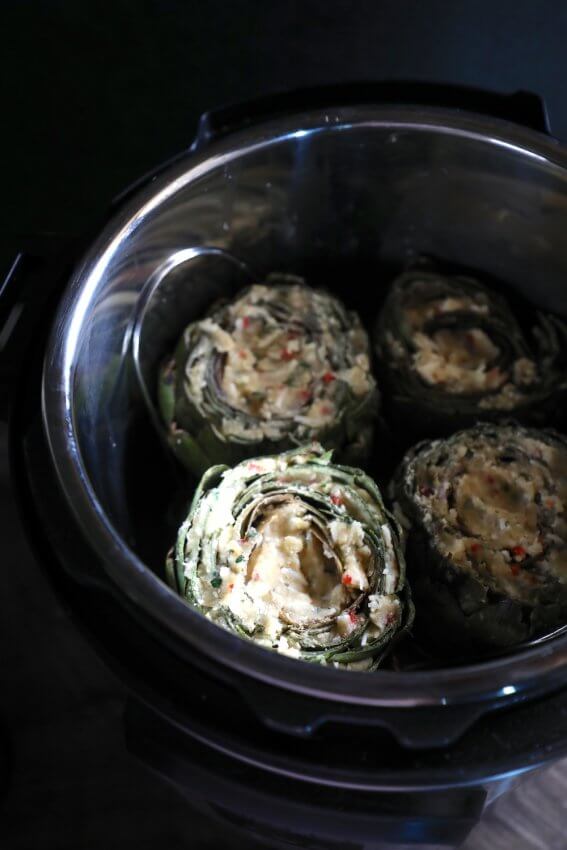 One of the things I love about making these Keto Stuffed Artichokes in the Instant Pot, is that they cook quickly and thoroughly. There’s nothing worse than working your way through the tasty but scanty “leaves,” while anticipation builds of getting to the best part, only to find a hard, undercooked artichoke heart at the center. ?

Cooking these Keto Stuffed Artichokes in the Instant Pot will give you a soft and meaty heart, which is absolutely saving the best for last – especially when you dip it in melted butter. It’s an experience not to be missed! 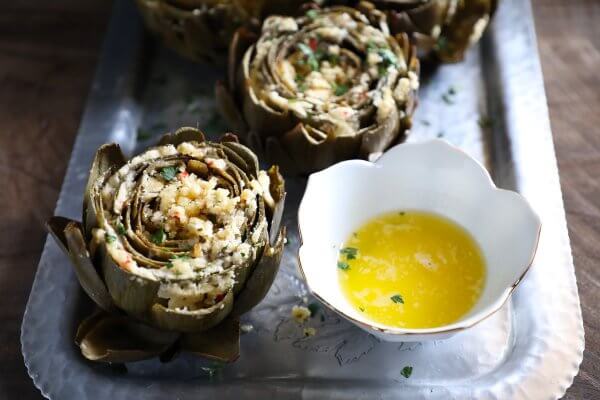 These Keto Stuffed Artichokes in the Instant Pot make the most delectable first course or side dish! Low carb and vegetarian too!

To make the stuffing:

To prep and stuff the artichokes: