Greetings Peeps! It’s been awhile since my last post and I apologize for being absent from the blog and social media lately. We are settling in to our new home and it’s been hectic! I’ve got a great keto lemon pie recipe for you though, and a bunch of photos of Belize at the bottom so I hope you’ll forgive my lapse!!!

So one thing you can’t get here in Belize is lemons, which I found weird because I’ve always considered it a tropical citrus fruit. I was surprised to find that there are lots of green limes and even green oranges, but not a single festive yellow lemon to be found anywhere here on the island of Ambergris Caye. 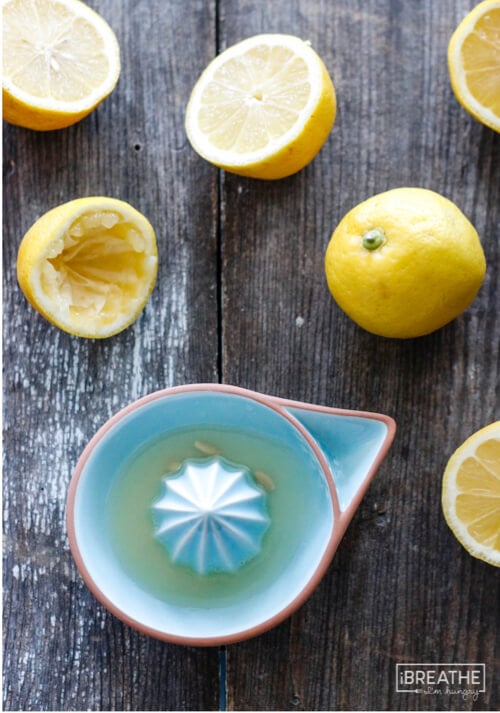 Knowing that from our scouting visit in February, (and because I really wanted to use this super cute lemon juicer I got at Target this winter) I decided to make this Keto Lemon Pie in New York before we left.

When I say before we left, I mean RIGHT before we left! I wish I’d taken a photo of the actual kitchen when I was trying to get these keto lemon pie pictures done, because we were literally moving out while I was finishing it!

Being a serious lover of lemon desserts though, I was determined to get this done in case it was my last keto lemon dessert for awhile!

And it will likely be – but what a way to go out! 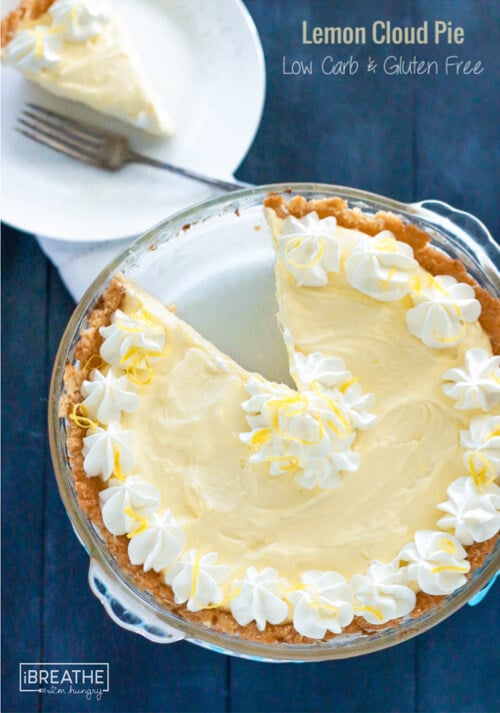 This keto lemon pie is intensely lemon flavored in the best possible way. The keto crust is a combination of my coconut crust for the Strawberry Swirl Cheesecake, and my almond shortbread cookie recipe. It’s sweet and toasty and sturdy enough to literally pick up the piece of pie with your hands to eat it.

You know, for when you’re standing in front of the open fridge at 2am and you don’t want to dirty any dishes (or have anyone hear your fork clinking against the plate and wake up to catch you eating pie out of the fridge in the wee hours….or maybe that’s just me….) so you just grab a piece and eat it standing there, reveling in its sweet, lemony goodness. 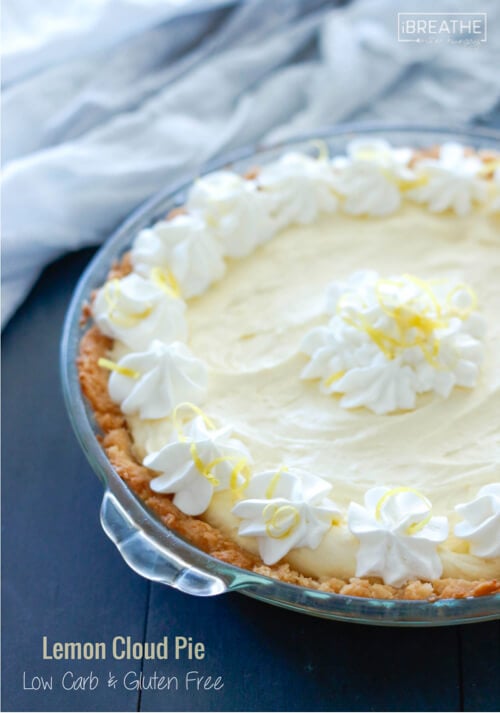 This keto lemon pie got me through the last couple of days of stress before we finally left for Belize. I even brought the leftovers with me to a friend’s house that we were staying with between the time we’d moved out and when we actually left the country! Which was bad because then I had to share – but it was a hit even with the non low carbers!

For science, we tried freezing the last few pieces of this keto lemon pie to see if it would be good. It was OK once we’d thawed it for a few minutes, but honestly I like the contrast of the pillowy lemon filling against the crunchy, toasty crust better when it’s just chilled in the fridge. 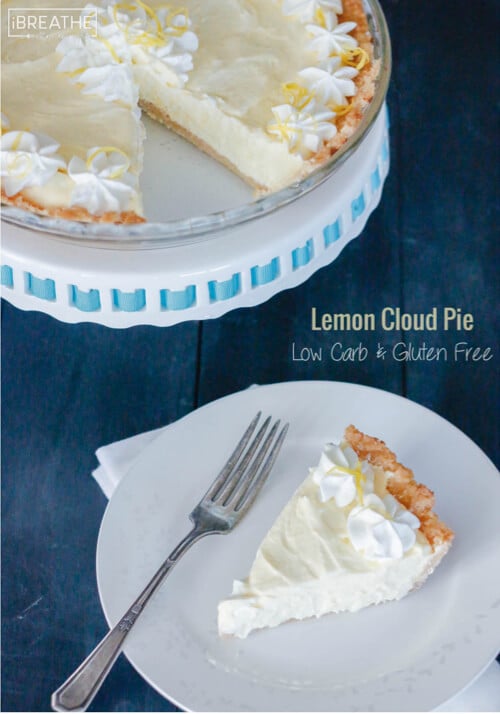 You’ll have to make it and let me know which you prefer!

As if there wasn’t enough to love about this keto lemon pie – it’s really easy to make! The crust bakes alone and the filling is made with my low carb lemon curd (which can be made in advance and kept on hand in the fridge), folded into some lightly sweetened whipped cream. 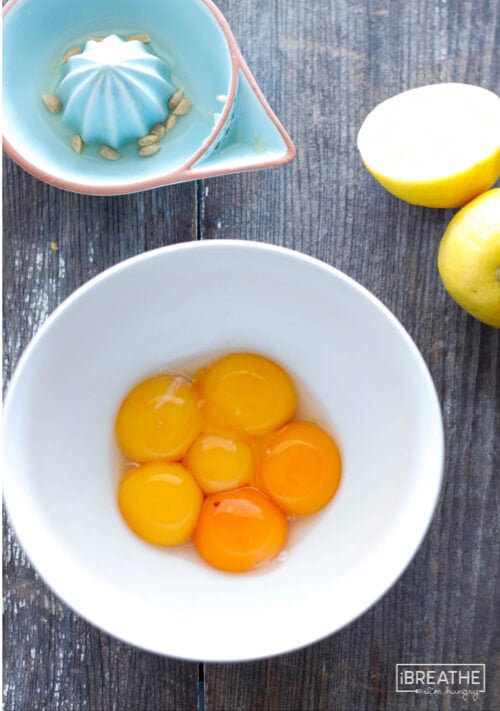 My point is, you could be eating this keto lemon pie in less than an hour! 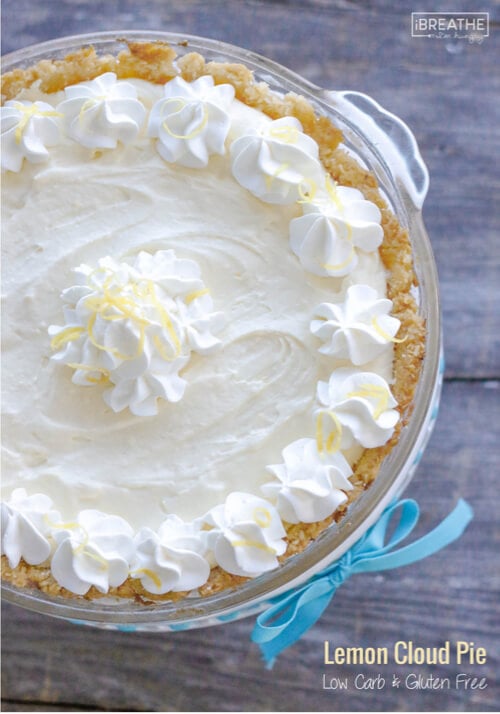 Lemony and sweet, this refreshing low carb pie recipe is easy to make and perfect for any summer party! Keto, Atkins, Sugar Free, and Gluten Free!

Note: Your crust may slide down a bit during baking. Once you remove it from the oven it will remain soft for about 10 minutes before hardening. If it’s slid down, wait five minutes, press it back into the shape you want and let it cool and harden before filling.

Since I won’t be eating any lemon desserts for awhile, I hope that you guys will indulge in lemon flavored everything so that I can live vicariously through you!

Meanwhile, don’t feel too bad for me – life in Belize has been pretty great so far and we’re finally settled in!

Movie night at the Truck Stop! Watched The Sandlot – always a classic!!! 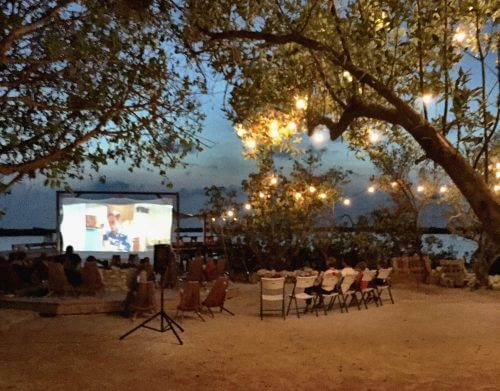 Getting our sip on at Izzie’s Juice Bar – I had the Hulk Juice! (don’t make me angry!) 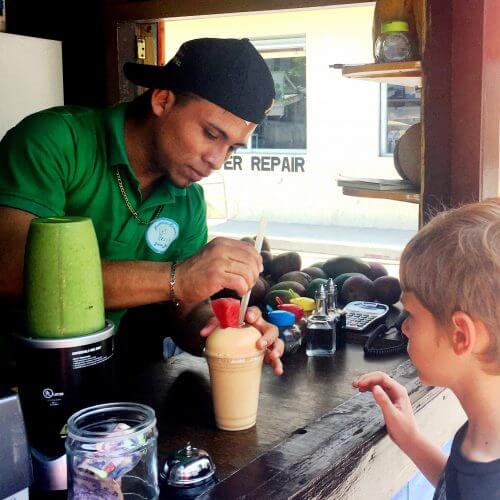 A great day at Secret Beach (which isn’t really a secret!) 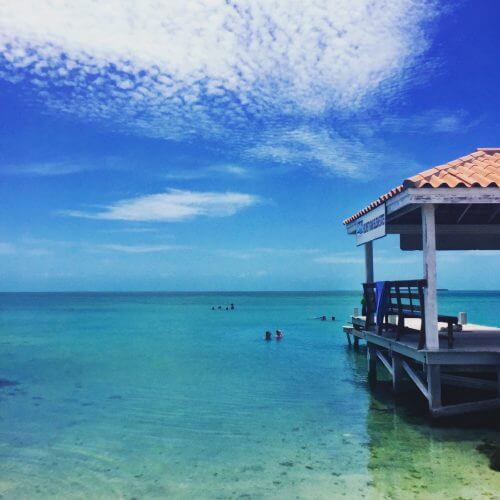 Some friends with a boat brought us out to a small island and we had the whole place to ourselves! 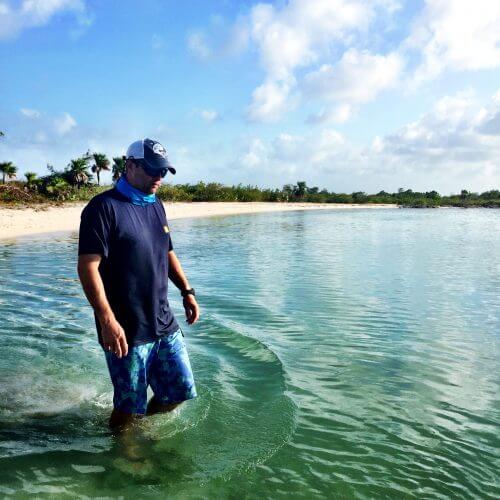 The guys went spearfishing and brought back some lunch! 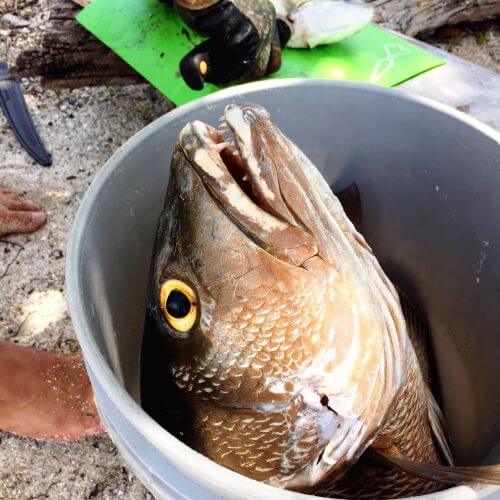 Lionfish are venomous and invasive – they are also DELICIOUS! 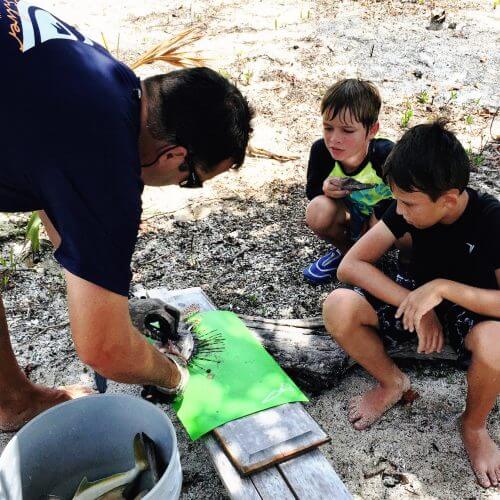 Prepping for lunch on the beach! 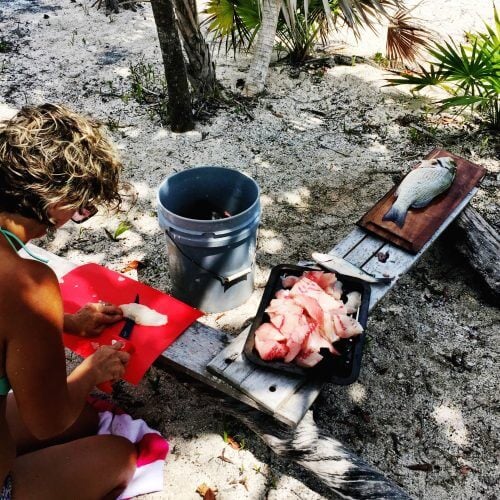 Beach picnic Belizean style! Some of my friends are on the Whole 30 this month – even here in Belize, who knew?? 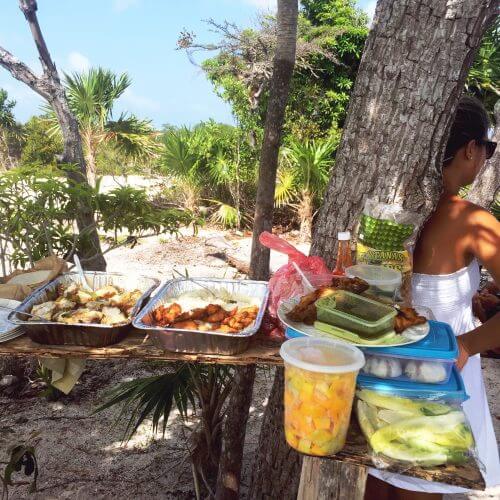 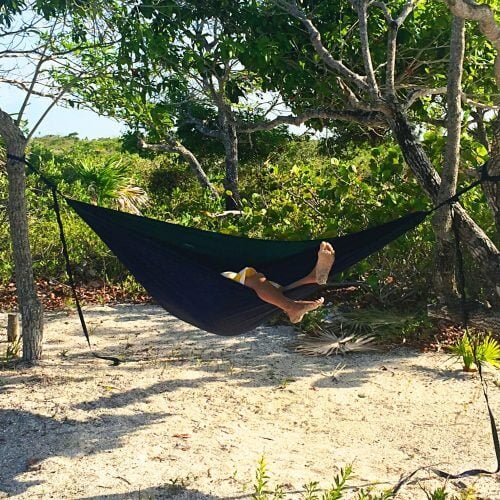 Had a game of catch and some frisbee… 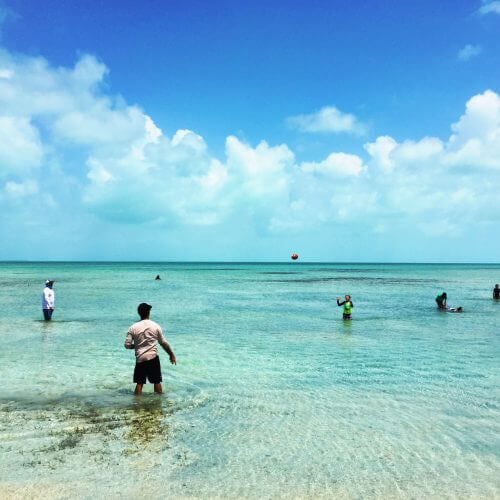 Mason and a friend snorkeling and looking for shells – the water is crystal clear! 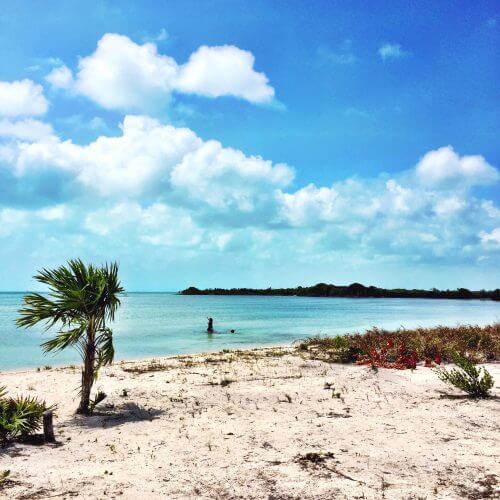 And finally, because you guys know I need my coffee… My favorite place for coffee on the island – Rum & Bean! 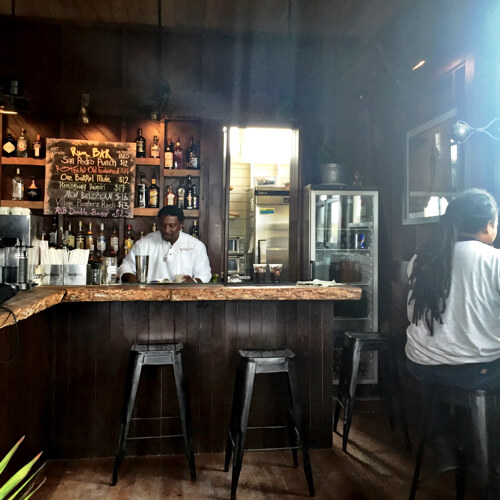 So that’s just a dump of some IG photos I’ve taken, but I plan to take my camera out to get some good shots of our favorite spots soon! Also a tour of the house! Stay tuned and have a great week, Peeps!