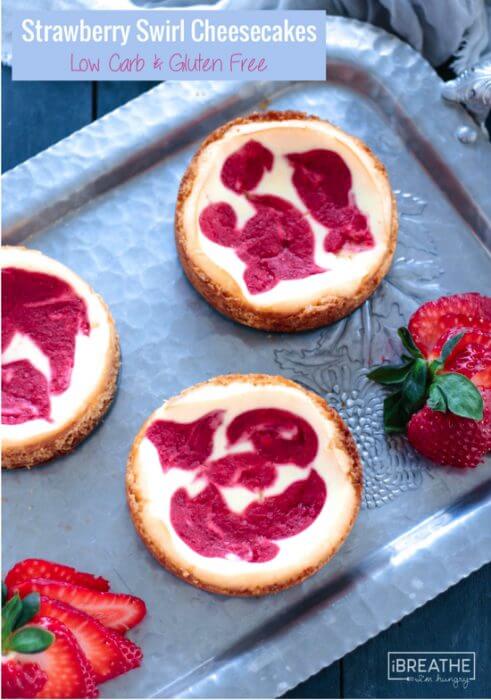 In the “old days,” ? ☎️ ? low carb cheesecakes were usually crustless ? – and basically a mixture of cream cheese, eggs, saccharin sweetener (ugh) and maybe some cinnamon.

With all of the improvements in sweeteners and the availability of low carb nut flours now, the low carb cheesecake game has definitely made some amazing strides!

And so I bring you this truly delectable low carb strawberry swirl cheesecake recipe! It’s so good that if you didn’t already know it was low carb and gluten free, you’d never guess! 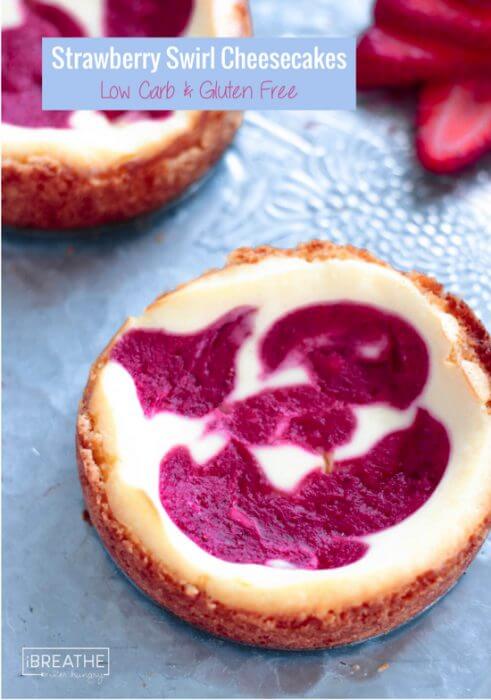 Now imma bout to get real with some of you…

You’ve gone and gotten lazy. There – I said it.

Don’t get me wrong – I love a quick low carb dessert recipe that gets me from craving to eating in less than five minutes as much as the next person (i.e. I’m not a complete moron.)

That being said, this no bake cheesecake thing is getting a little out of hand.

In fact I’d go so far as to say that “no bake” cheesecake isn’t really cheesecake at all – at best it’s a really heavy mousse. And I’m not saying that it’s not tasty – but it does not, it simply can not, compare to REAL cheesecake.

So I’m going to ask you to work with me here and turn your oven on for this one. ? That’s right, you can do this. ? And I promise you that it will be worth it. ?

This crust is the same as the one for my wildly popular low carb raspberry cheesecake bars – it’s made with dried coconut and has a crunchy, chewy, texture and sweet, toasty, flavor that rivals any traditional graham cracker crust in my opinion.

The cheesecake itself contains less eggs than some versions, which results in a sturdy, but still very creamy texture that is to die for. ? Seriously.

I made this in three small cheesecake pans because I’d already packed up my large springform pan and put it into storage for our move, but you could easily make this in a 9 inch springform pan. You may have to cook it a little longer to get the center to set, but a quick jiggle of the pan will let you know when it’s ready (it will still move, but will no longer be liquidy.)

You will definitely need to let this cheesecake chill for at least a couple of hours before the center sets all the way, so plan ahead for that if you’re making it for an event.

Super rich, this cheesecake won’t be as tall as some others (does that make it a “short”cake? Sorry… ?) but the crust to cheesecake ratio is perfection as is in my opinion. 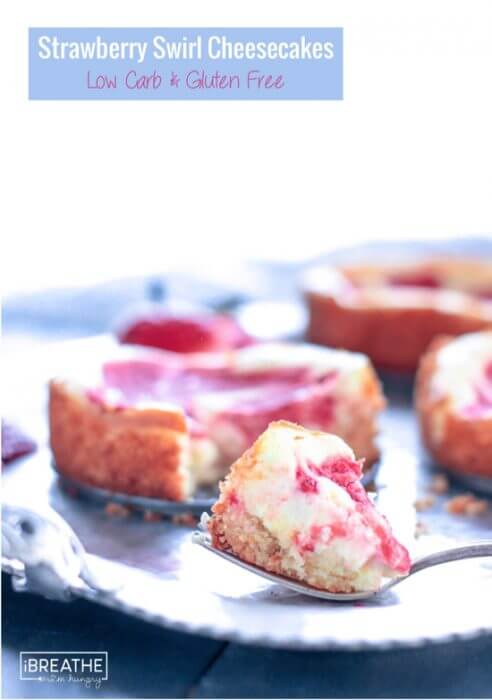 If you prefer a really thick cheesecake, you’ll have to double the filling recipe and then bake it for at least 30 minutes (maybe more) longer to get it to set up. Then will likely take a full 10-12 hours in the fridge to thoroughly chill. I have no doubt the end result will be epic and totally worth the extra time though!

So are you guys with me??

It’s time for a “real” (actually baked) cheesecake revival! Let’s do this! ?

NOTE: The company that makes my recipe videos used a larger pan and the cheesecake is extremely thin as a result – more of a bar and that’s fine, but if you want it a bit thicker than use the called for size, and if you want it really tall then double the filling recipe as stated in the instructions.

This low carb strawberry swirl cheesecake has a lush, creamy texture and a beautiful flavor with notes of lemon and sweet berries. The coconut crust is perfection.

For the strawberry swirl:

To make the crust:

To make the cheesecake filling:

SUMMER IS COMING! Not ready to get into that bathing suit yet?!? I know the feeling!!! Get back on track with my free keto menu plans and you’ll be hitting the beach with confidence in no time!