Before I get to the recipe, just a quick note that I’m doing the Whole 30 with some friends here in Belize this month, and many of my upcoming recipes will likely reflect that since it’s how I’ll be eating.

Don’t freak out – the recipes will still be delicious and mostly keto friendly! ?

It’s been a couple of years since I’ve done the Whole 30, and it will be just the thing I need to get my eating under control since I’ve been enjoying far too many local Belizean dishes that are loaded with grains, legumes, and other things my body hates since we’ve gotten here (but ohhhhh it’s been DELICIOUS and FUN!) #honesty

Time to get serious though, and this month will hopefully reset my body and get me back on track with healthy eating. Also keto is so much easier for me after a month of Whole 30 because it feels extravagant and not at all restrictive when I get to eat cheese, dark chocolate, and have the occasional drink again!! (I’m looking at you low carb moscow mules!)

If any of you are interested in doing the Whole 30 program, you can get a lot of free downloads on their website to help you get started and stay on track through the month. Back when I was doing it they had a great book called It Starts With Food, but since then they have published a Whole 30 book specifically for the program that I just downloaded and can’t wait to start reading!

Ok, now on to this fantastic green beans recipe – which just happens to be Whole 30 friendly even though I made it weeks ago while still in New York.

For some reason, green beans are the red-headed stepchildren of the veggie world. You rarely see them featured on food blogs, in magazines, or on cooking shows. Why is that?

Green beans are a perfectly respectable veggie – plenty of vitamins and usually pretty cheap to boot. So what’s the problem??? 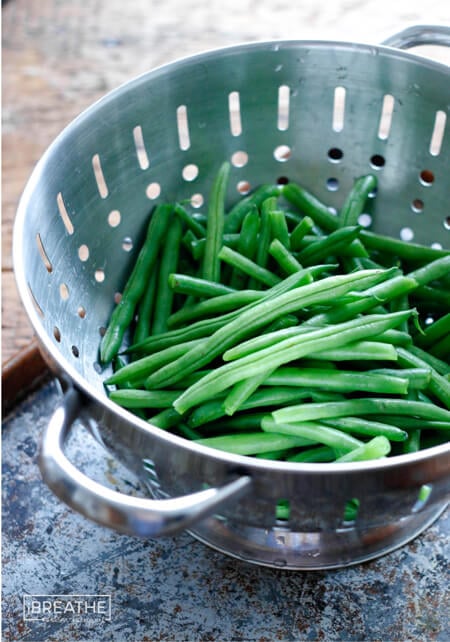 I’ve done some soul searching recently to figure out why I almost never make them, and it’s been hard to pinpoint.

Maybe it’s because they lack the versatility of other veggies like broccoli and cauliflower. There is only so much you can do with a green bean – saute them in garlic and oil, maybe throw in some slivered almonds. Or the ubiquitous green bean casserole. Ugh. SO. BORING.

Because I knew green beans would be next to impossible to find here in Belize, I decided to give them one more shot before we left New York. 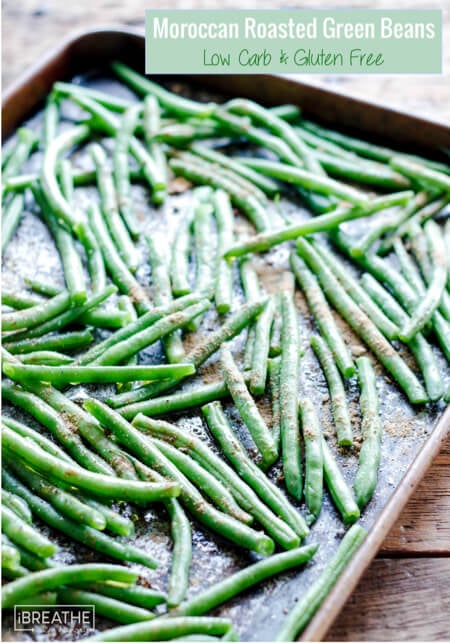 I wanted to keep it simple and easy, but also maximize the flavor and give them some “oomph,” as my mom would say.

Since Ras el Hanout (a traditional North African / Moroccan spice mixture) is one of my favorite seasonings, and I had two bags to use up before I left, I sprinkled a generous amount on my green beans along with some olive oil, salt and pepper, and then roasted them in the oven.

If I’m being honest, my expectations weren’t that high. They were just green beans after all… 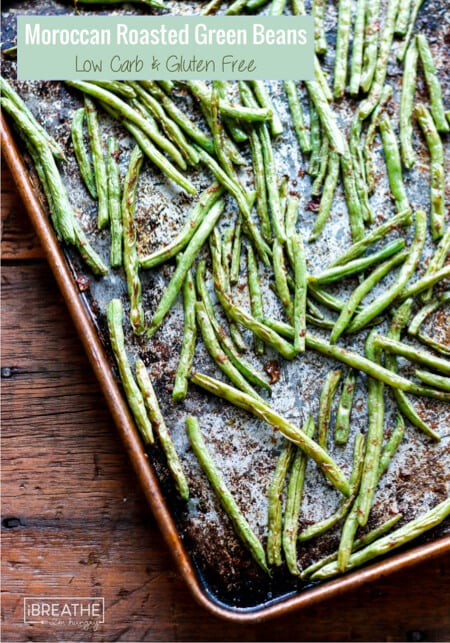 Friends, I’m here to tell you that these are by far the best green beans I’d ever tasted. Now I’m not going to come at you with bold statements claiming these are as good as french fries or potato chips or anything like that – but they were literally addicting.

As in I COULDN’T STOP EATING THEM.

They are both sweet and savory, a little spicy, with a distinct and unique flavor that is impossible to describe, but OH. SO. DELICIOUS. 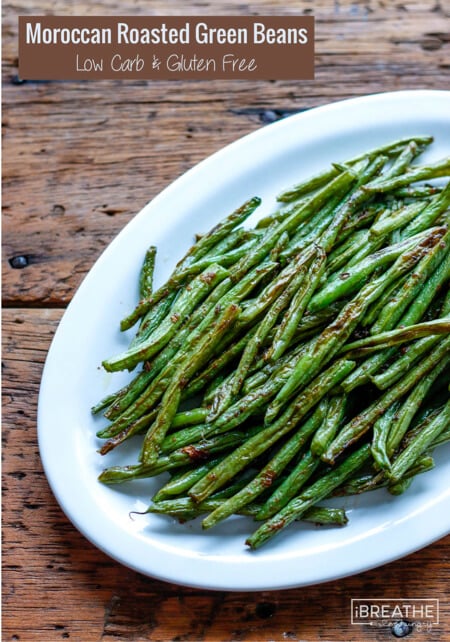 After the photo shoot I munched on them by hand while I edited photos. Before I knew it they were all gone and I was staring incredulously at an empty platter! GREEN BEANS!? I kid you not!

But don’t just take my word for it! Mr. Hungry, hater of most veggies and ambiguous at best about green beans, ate all of the rest for dinner alongside a pork roast that I’ll post the recipe for soon.

His comment? “What’s on these green beans?!?! They taste incredible!” 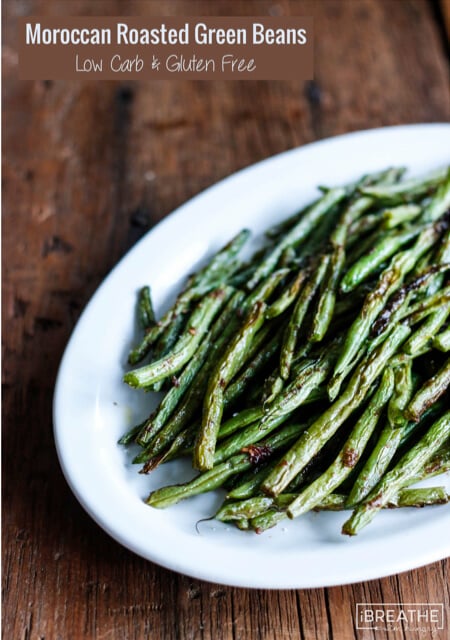 So if you’re like me and usually walk right on by the green beans while heading to the cauliflower section, stop and give them another chance! I promise you won’t regret it!

You can purchase my favorite authentic Ras el Hanout seasoning on Amazon, which contains the rose petals and lavender blossoms which I LOVE.

I believe Trader Joe’s has their own version as well – or you can make a passable substitute using this recipe.

If you get/make some Ras el Hanout, you can also make my favorite grilled lamb chops recipe from a couple of years ago!

While I know this green bean recipe is unlikely to go viral, I REALLY hope that some of you guys will at least try them!!!!

Then be sure to let me know if they were a hit with your friends and family too!

Meanwhile, for those of you that don’t live on a tropical island, SUMMER IS COMING SOON! Not ready to get into that bathing suit yet?!? I know the feeling!!!

Get back on track with my free keto menu plans and you’ll be hitting the beach with confidence in no time!