Every fall back in CT, my grandmother and I would make lots of Tourtieres (French Canadian Pork Pies) together to keep in the freezer for special occasions throughout the year. I wrote a post about it a few years back, and shared our family recipe.

Since then I’ve gotten lots of requests from people for a low carb and gluten free Tourtiere recipe.

Well I finally got around to making a low carb and gluten free version that you and I can eat without going off plan. Don’t tell my grandma but Mr. Hungry thinks it’s even better than the original! Shhhh….

Unfortunately it was last year when I got this recipe down, and then it took me three tries to finally get some decent photos (even these had some cheese freckles because I mistakenly used pre-shredded cheese that didn’t melt correctly.)  By the time I’d gotten photos I could use, the season had passed and I decided to hold off on posting my low carb Tourtiere recipe until this fall. 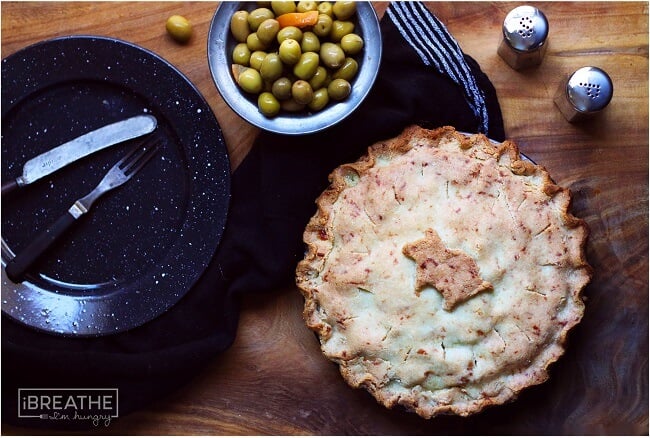 Well this morning I finally set out to write the post, but couldn’t find the recipe because I’d lost the notebook I wrote it in during our move to NY last spring. Which wouldn’t have been an issue if I’d written it in one of my large official recipe notebooks that I keep obsessive track of – those I have.

Hi – my name is Mellissa and I’m a serial jotter.

I distinctly remember jotting this recipe down in a tiny notebook last fall, with plans to rewrite it in the official notebook later after I’d tried it a few times and perfected it.

And it would have been fine because I kept that notebook with my others most of the time – but then we packed up in a hurry and moved to NY unexpectedly, and you know how that goes…

So I just tore my house apart looking for the stupid tiny notebook, and finally thought I’d found it – YAY!

Except when I sat down at the computer to locate and type up the recipe… I realized it was the wrong tiny notebook!! 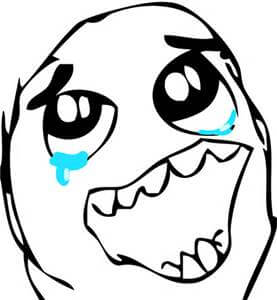 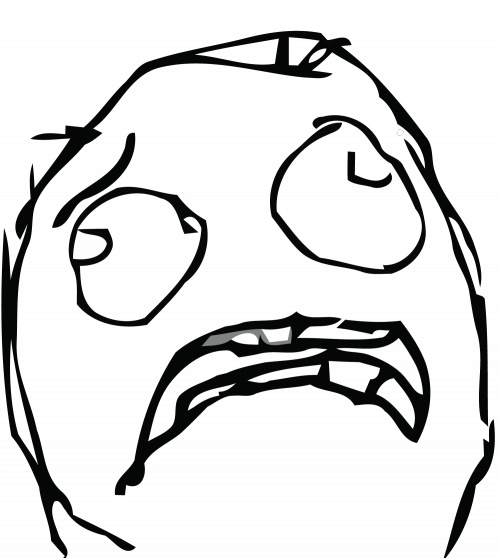 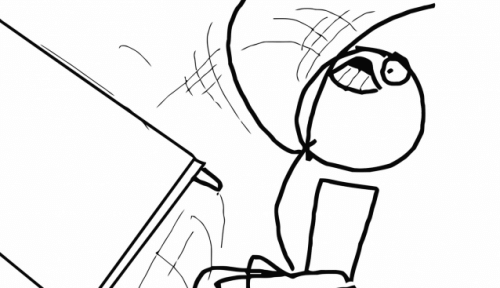 Curse you tiny notebooks – WHY ARE THERE SO MANY OF YOU???

I rallied (read: drank more coffee) and put my thinking cap on (also coffee) and thought hard about where I would keep such a valuable, albeit tiny, treasure trove of blog fodder. Finally it hit me and I went to the only other place my brain might have thought made sense to put it while we were moving, and that was in my laptop bag.

The laptop bag itself was a challenge to locate, and I finally found it jammed underneath a bunch of junk on the floor of what I like to call the “closet of death” under the stairs. So named because some genius thought it would be a great idea to pound a bunch of long nails into the backs of the treads to hang stuff on, but if you stand up quickly and forget they are there…

I could remove the nails, but it’s one of those things I never think of until I’m actually IN the closet of death, usually ransacking it with some urgency and no time to fool around pulling nails. So I always file it away in my brain (read: forget instantly) to get back to later (never) until the next time I need something desperately in there. I could always hang a hard hat on one of the nails and just wear it for safety when I rummage – but I probably won’t remember to do that either.

ANYHOO – I finally dug out the laptop bag and BOOM.

I drank more coffee (you know, to celebrate) aaaaaand now we can finally get back to the low carb Tourtiere recipe that’s been over one year in the making. 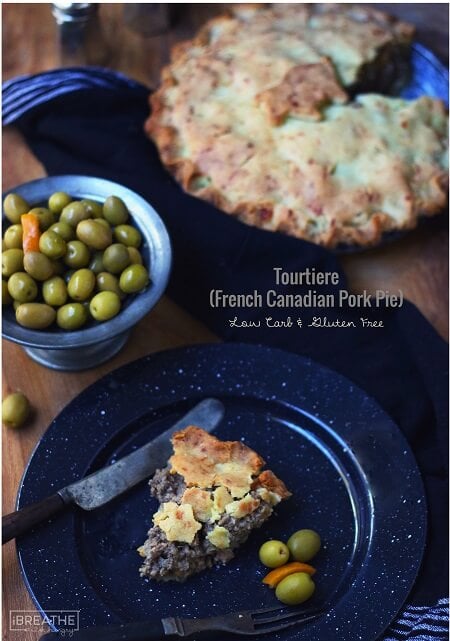 If you’ve never had a Tourtiere it’s a meat pie typically made with ground pork, mashed potatoes or ritz crackers for filler, and fragrant herbs and spices like sage, allspice, cloves, etc.

It has a very distinct and comforting flavor and texture that I have loved since my childhood. My grandmother has always served hers with manzilla olives on the side, and their tangy brininess perfectly complements the savory pork pie.

For me that’s the only accompaniment a good Tourtiere needs (maybe a salad if you’re having it as a main meal rather than an appetizer,) but I have seen people peel off the top and load it up with ketchup.

If you try that at my house I will cut you. That is all. 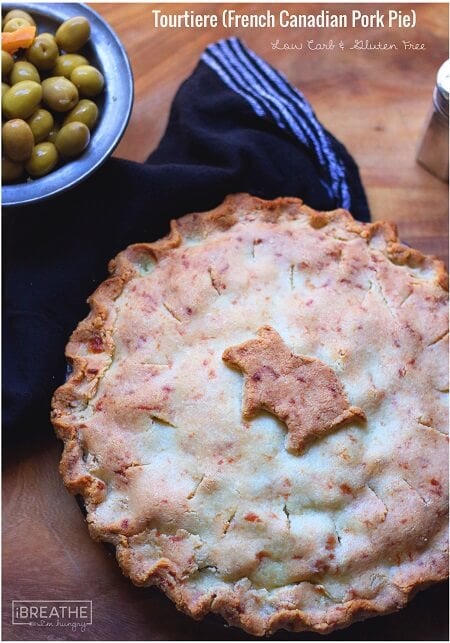 For the crust I used a variation on the low carb crust for my low carb chicken pot pie. That one uses cheddar cheese in it but I didn’t want a strong cheese flavor in this – so I substituted mozzarella. It works great and tastes amazing, but if you don’t get it fully incorporated it will cause cheese freckles in the dough as seen above.

For that reason I recommend using a block of full fat mozzarella that you grate yourself, rather than the pre-shredded stuff which is coated with starch and won’t melt right. 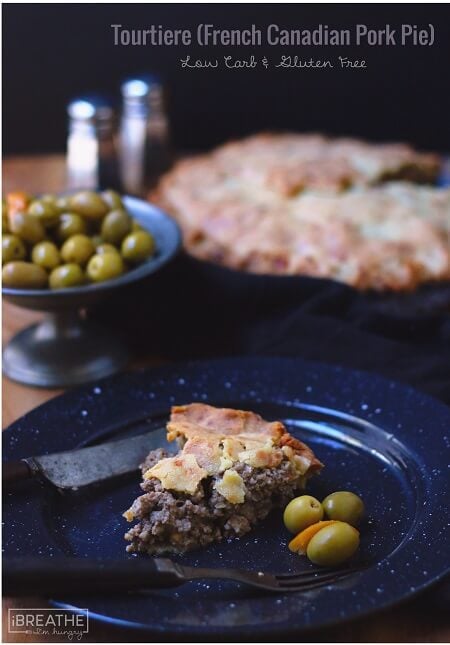 To make the Tourtiere filling low carb I used pureed cauliflower in place of the traditional mashed potatoes that my grandmother uses. I wasn’t sure how it would work out when I first tried it, but the slight sweetness of the cauliflower actually adds a depth of flavor that the potato-based pork pie doesn’t have. It’s fantastic!

Mr. Hungry, a sworn hater of cauliflower LOVES this filling and that is a miracle in itself.

Together, the crust and meat filling combine to make a truly comforting and sublime flavor and texture that is sure to be a hit with the entire family!

It’s almost worth waiting the whole year for!

This low carb and gluten free version of the traditional Tourtiere or Canadian Pork Pie tastes just as good as the real thing! Keto, Atkins and Paleo friendly!

For the pork filling:

To make the pie crust:

To make the pork filling:

New to the low carb lifestyle and need some help

? Try my FREE 3 day keto kickstart menu plan to get into ketosis fast! Then follow it up with any of my 12 free weekly menu plans – complete with shopping and prep lists!

To get more great recipes

for fall or anytime, download my super bundle of FIVE e-books for just $19.99!